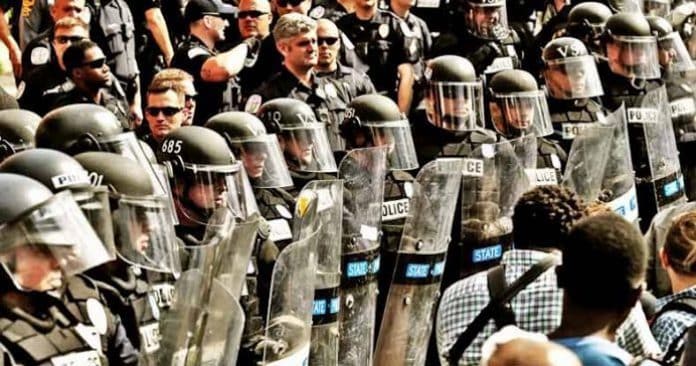 The Truth About Charlottesville: FALSE FLAG, Police “Stand Down”

This was first published on YourNewsWire.com

A Charlottesville police officer has come forward to express his anger at being told to “stand down” by the city mayor during violent clashes between protestors. He also claims the protests, which pitched “white supremacists” against members of Antifa, were “set up” to further the agenda of the elites.

“We [Charlotesville police] were ordered to bring the rival groups together. As soon as they were in contact with each other, we were told to stand down. It was outrageous. We weren’t allowed to arrest anyone without asking the mayor first. We weren’t even allowed to stop the driver as he sped away.“

“The event was being set up as far back as at least May and it went like clockwork.”

Michael Signer, the mayor of Charlottesville, ordered police to stand down during the most chaotic and destructive period of the protests – despite police protests against the orders.

“We wanted to do our job and keep the peace. But these mother******s in charge really want to destroy America.”

Fox News reporter Doug McKelway was on the scene in Charlottesville and he backs up the police officer’s claims.

“I can say, havig been in Emancipation Park from early on that morning, that what I saw with my own two eyes confirms what this law enforcement source told us. At least from all visible apearances. We saw people coming out of that park who had headwounds, who were bleeding from the head, people walking into that park with bats, with sticks — you saw what they were wearing — helmets, body armor, they had come — and this pertains to both sides — they had come to do damage.. you cannot help but notice from that video that police had been more pro-active, they could have potentially calmed this thing down to some degree.”

Michael Signer is a Virginia Democratic activist with close ties to Barack Obama and John Podesta. Before landing the Charlottesville mayor job he previously worked closely with Podesta at the Center of American Progress and worked with him again on Barack Obama’s State Department Transition Team.

The New World Order, led in the United States by elite operatives Obama, Podesta, Soros, Clinton and company, are pulling out all the stops to create division through chaos and destruction.