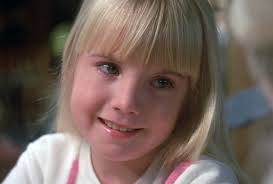 With the recent allegations of sexual abuse coming out in Hollywood, pedogate (or what some would call pizzagate) is seeming more and more real. I have been following this story with interest since the wikileaks during last years elections with a mix of horror, belief and disbelief.

Whether this is a highly organized ring of pedophiles or just some bad apples is a hot debate but when you mix, money, power and international fame things tend to get messy.

I have a rather sad story to discuss today and this is the death of Heather O’Rourke, the little girl who played Carol-Anne Freeling in all three poltergeist films. Heather was also quite famous during the eighties as she had parts on multiple hit tv shows such as Webster and Happy Days.

Heather was born in 1975 and died at the age of only 12 in 1988 from intestinal stenosis–a severe bowel obstruction that the girl evidently had from birth. The obstruction caused an infection that, in turn, brought on septic shock. The shock prompted full cardiac and pulmonary arrest. As terribly heartbreaking as this is there may be more to the story.

Famed gossip website http://www.crazydaysandnights.net/ has for years been a source for behind the scenes gossip about sordid events going on in Hollywood. The main writer ENT LAWYER claims to be a lawyer in the entertainment business and anonymously releases blind items almost every day. He keeps the identities of those in question secret but usually gives enough details that with some google searching it can be narrowed down to a few people.

His Blind item for yesterday, Nov 9 was particuraly disturbing and I will paste it here in it’s entirety:
Today’s Blind Items – Molesters Killed Her

The comments section of this blind item went wild as did 4chan and voat.com/pizzagate. Let’s break this down as to why people think this was referring to Heather O’Rourke.

The fact that this poor girl died at such a young age is already heartbreaking but if there is any credibility to these claims it seems at least possible that some foul play was involved in her death. The claims made by Corey Feldman and Corey Haim and countless others about pedophiles being rife in Hollywood match up so well with all the gossip and whispers that are floating around they are becoming hard to ignore.

Some have even speculated that Steven Speilberg could be implicated, as mentioned already he discovered her and has worked with countless child actors over the years including Corey Feldman and Drew Barrymore who has a sordid Hollywood Youth.

I am on the fence about all of this, the evidence seems to be getting stronger everyday that something organized and nefarious is afoot in Hollywood. I can understand why victims would be afraid to come forward but I hope for the sake of those currently suffering abuse in the industry that more and more people will start coming forward so these scumbags can be thrown in jail to rot.