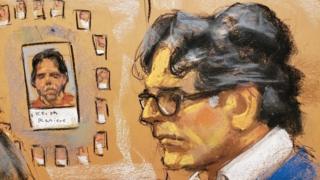 Raniere was at the top of the cult’s sexual pyramid scheme involving sex slaves, say prosecutors

Founder of the NXIVM sex cult Keith Raniere was found guilty on all federal charges for running a “sexual pyramid scheme” in which he branded, trafficked, and enslaved young women [and ‘children’].

Prosecutors said Raniere, known as “Vanguard” among his followers, helmed a secret group within NXIVM called DOS, where he recruited female “slaves” to work as “masters” of their own slaves, and performed rituals where he branded them like cattle and forced them to perform sex acts.

“This trial has revealed that Raniere, who portrayed himself as a savant and a genius, was in fact a massive manipulator, a con man and the crime boss of a cult-like organization involved in sex trafficking, child pornography, extortion, compelled abortions, branding, degradation and humiliation,” said Richard Donoghue, U.S. Attorney for the Eastern District of New York, told reporters Wednesday. “The evidence proved that Raniere was truly a modern-day Svengali.”

“Keith Raniere’s crime spree has ended and his victims will finally see justice.”