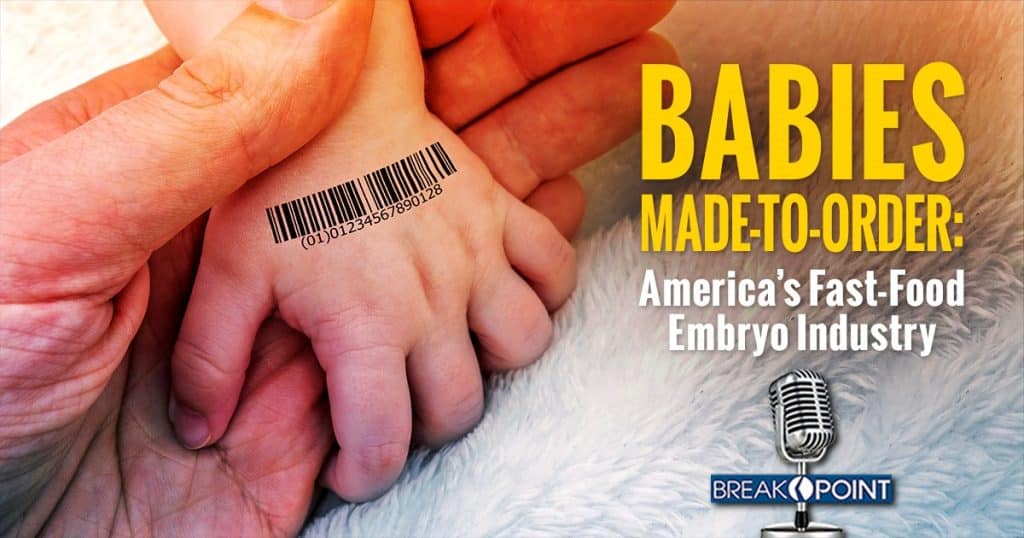 For most of human history, the mystery of life’s beginnings were tucked away inside the womb, safe from prying eyes and meddling hands. But in the last few decades, new technologies have changed all that.

For example, in-vitro fertilization, the process of joining sperm and egg in a laboratory and implanting the resulting human life in a gestational mother, has become commonplace, despite enormous ethical concerns. Many countries around the world have addressed those concerns in the form of laws.

Still, IVF is usually performed in large batches, due to the expense and pain involved in egg-retrieval. Often, dozens of mature eggs are harvested at a time, and only one to a handful are ever implanted after being fertilized. The remainder of the embryos are either destroyed or kept indefinitely in a freezer. In other words, human lives are created and then snuffed out in order to produce—most of the time, not all the time—just one baby.

But that’s far from the only moral problem spawned by IVF technology. Because embryos are created outside the womb, we now have the ability to genetically screen them, or to see ahead of time what sort of child each embryo will grow into, if allowed to live. Often, this technology is used to screen out heritable genetic diseases, like Down syndrome. This, of course, involves ending newly-conceived lives that don’t meet our standards of perfection. It’s killing, not curing.

That’s bad enough. But as Ariana Cha wrote recently in the Washington Post, the United States has become the go-to destination for parents hoping to select their baby’s sex, or even pettier traits like height, athletic ability, and eye color.

While countries like Britain, India, the Netherlands, Norway, Sweden and others have or are in the process of regulating the industry, in America fertility is treated like a McDonald’s drive-through. Would-be parents come from around the world to create made-to-order embryos in U.S. fertility clinics, and then select for non-medical characteristics like sex and eye color—a practice even China has banned.

By some estimates, the U.S. fertility industry is worth $5.8 billion, and growing—thanks in part to our shocking lack of oversight or ethical scruples. The Journal of Assisted Reproduction and Genetics reported back in March that almost 73 percent of U.S. fertility clinics provide gender selection. Almost all of these offer the service to couples who have no fertility issues—in other words, to those who only use IVF purely as a means of getting a boy and avoiding a girl, or vice-versa.

One California fertility specialist summed the situation up with chilling honesty: “If you do what I do, you can’t have a strong ethical opinion.”

These practices will, of course, only accelerate. Our ability to talk about ethical and legal boundaries as a culture is currently completely outpaced by technology. The Post reports that biotech companies like Myome and Genomic Prediction will soon be offering couples the ability to accurately and quickly screen entire batches of embryos for disorders, physical imperfections, maybe even low IQ.

The consequences of this are the stuff of science fiction movies like “Gattaca” and “The Island.” Designing babies not only involves the destruction of unwanted lives—it turns the lives that result into trendy commodities—products we have ordered and paid for rather than gifts we have received from God.

Anyone who thinks parents with means won’t look to fertility technology to give their kids an edge in life, or to show off on Instagram, has a lot to learn about human nature. A world in which those who haven’t undergone pre-implantation screening are looked down upon isn’t a world I want to live in.

The solution isn’t to shut down or slow the march of science. It is to direct science with ethics. It’s to seek to recognize and restore human dignity, not extinguish or commodify it. But that involves knowing what human life is, and what it’s for . But these are questions are best answered by a worldview that sees children as made in God’s image, not as something made-to-order.