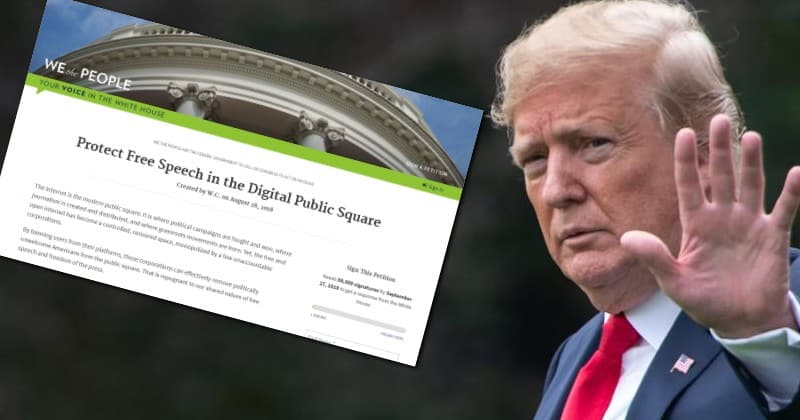 The full petition, which can be signed here, reads as follows;

The internet is the modern public square. It is where political campaigns are fought and won, where journalism is created and distributed, and where grassroots movements are born. Yet, the free and open internet has become a controlled, censored space, monopolized by a few unaccountable corporations.

By banning users from their platforms, those corporations can effectively remove politically unwelcome Americans from the public square. That is repugnant to our shared values of free speech and freedom of the press.

The President should request that Congress pass legislation prohibiting social media platforms from banning users for First Amendment-protected speech. The power to block lawful content should be in the hands of individual users – not Mark Zuckerberg or Jack Dorsey.

The petition was launched after numerous conservative voices were banned or deplatformed by Big Tech in recent weeks, including Alex Jones, who was censored by Apple, Facebook, YouTube, Spotify and others in a coordinated strike.

Since those bans, Trump himself has repeatedly tweeted to draw attention to social media censorship, including today when he accused Google of favoring negative search results about him in its news results.

….results on “Trump News” are from National Left-Wing Media, very dangerous. Google & others are suppressing voices of Conservatives and hiding information and news that is good. They are controlling what we can & cannot see. This is a very serious situation-will be addressed!

“Too many voices are being destroyed, some good & some bad, and that cannot be allowed to happen,” he wrote. “Who is making the choices, because I can already tell you that too many mistakes are being made.”

“Social Media is totally discriminating against Republican/Conservative voices. Speaking loudly and clearly for the Trump Administration, we won’t let that happen.”

In addition to the petition, with the help of top media lawyers, Infowars has drawn up a series of recommendations to be sent to the Trump administration that will help protect free speech online.

Suggestions include directing the Justice Department to open investigations into whether there are First Amendment & anti-trust law violations by the major social media platforms. Trump could also set up a Presidential Commission made up of free speech experts to advise him on future action.