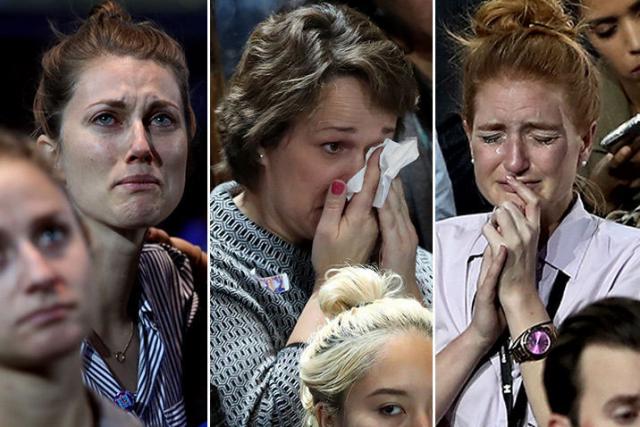 Are You Suffering From TARD (Trump Acceptance Resistance Disorder)?

People with Trump Acceptance Resistance Disorder are characterized by a persistent unwillingness to accept that Donald Trump is going to Make America Great Again. Individual sufferers often display signs of paranoia and delusion; in acute cases psychotic episodes have been observed. Trump Acceptance Resistance Disorder is different from being upset about the results of the 2016 presidential election; People with TARD are unwilling or unable to accept reality, despite irrefutable evidence.

According to the DSM-V, individuals with TARD exhibit most or all of the following symptoms:

– Telling others they are moving to Canada

– Fixated on fantasies about the Electoral College

– Protesting an election no credible source contests the outcome of

– Exclamations that “Someone” should do “Something”

– Claim that anyone who disagrees with them is some combination of Racist, Sexist, Bigoted, Homophobic, and actually some sort of Hitler persona

Trump Acceptance Resistance Disorder was directly caused by the election of Donald Trump as President of the United States of America. For many, both in America and worldwide, this was a shocking and unexpected outcome; their preferred news sources having failed to inform them that the alternative candidate was a criminal parasite in such ill health she got chucked into the back of a van like a kidnap victim.

Research is ongoing, but TARD appears to correlate closely with the following environmental and behavioral factors:

– Membership in the Democratic party

– Identifying as a Feminist

– Currently enrolled in college, and/or

Diagnosis of Trump Acceptance Resistance Disorder is straightforward. Ask the patient if Donald Trump is going to be the Next President of the United States of America. Some patients will become agitated, and may attempt to deflect. It’s critical you press them on the issue, even if they start babbling about ‘muh triggers’. A sufferer of TARD will begin to ramble incoherently, often displaying three or more of the symptoms within a short period of time.

The only known effective treatment is exposure therapy. The patient must be repeatedly exposed to reality, and should wear a Make America Great Again hat as long as they are able to tolerate it. Each exposure should increase in length, after a week the patient should be encouraged to be seen in public wearing the MAGA hat. Coach the patient to refer to Donald Trump as President-Elect Trump. Patients with TARD are very resistant to treatment, and dangerous in large groups. Any possibility of treatment requires that they be separated from their hive-mind support apparatus; they cannot begin the process of accepting reality in the presence of encouragement towards delusion and irrationality. Separation may require the assistance of law enforcement. If you have a friend or loved one suffering from TARD, urge them to seek treatment.

Together we can beat this scourge, and Make America Great Again!

This article (Are You Suffering From Trump Acceptance Resistance Disorder (TARD)?) is free and open source. You have permission to republish this article under a Creative Commons license with full attribution and a link to the original source on Disclose.tv READ MORE: https://www.disclose.tv/news/are_you_suffering_from_trump_acceptance_resistance_disorder_tard/136500