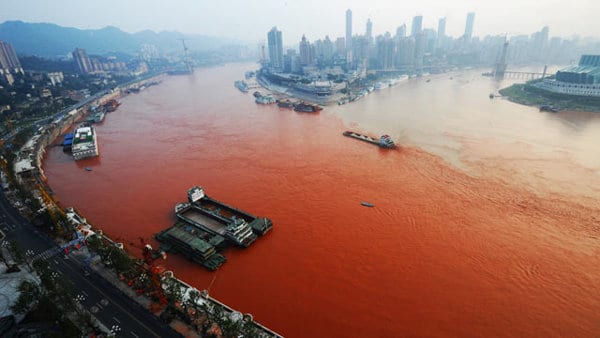 Chinese officials reported noticing the Yangtze River (longest river in Beijing, China) having a stretch of bright red color, brighter than previous times in the past (they report). The first writer on this “mystery to many” appears to have been Eli MacKinnon and he described it as “tomato juice”, and funny that his article doesn’t mention any single word about THE BOOK that prophesied this incident.

Not much has been said about this phenomenon other than what Eli has reported here.

Here is a snippet:

“A stretch of China’s longest river has abruptly turned the color of tomato juice, and officials say they don’t know why.

Residents of the southwestern city of Chongqing first noticed that the Yangtze River, called the “golden waterway,” had a spreading stain on its reputation yesterday (Sept. 6).

Though the bright-red water was concentrated around Chongqing, Southwest China’s largest industrial center, it was also reported at several other points along the river, according to ABC News.”

Another article popping up today on Today online (a snippet):

State broadcaster CCTV said that the environmental protection bureau in Chongqing had ruled out the possibilities of industrial and sewage pollution causing the river to turn red.

“It’s not a problem,” one boatman said in Chongqing. “The water colour is within the normal range. For us boatmen, the colour just means the river is washing its water.

“But the colour this year is redder and darker,” he added.

Investigations are still underway but authorities said silt deposits brought in by floods from upstream were a likely cause for the colour. AGENCIES [added by Eternal Affairs: if had Rigorous Honesty, would admit they are ENTIRELY puzzled over this situation. I’m not as quite puzzled along with some or many of my friends.]

We do know one thing for certain. The Bible, when talking about “the end days” has this to say,

“And the second angel sounded, and as it were a great mountain burning with fire was cast into the sea: and the third part of the sea became blood” – Revelation 8:8

Even though the chronological order of things doesn’t match up, it DOES portray these things clearly in the Bible.

BUT … keep in mind!
continue along in the Bible and you’ll find the 3rd trumpet of Revelation:

The End Times will cause both fresh & salt water to be contaminated, whether by blood or wormwood which could cause blood from the living creatures that die.

No matter what, the scientists will never pick up the Bible and Have Faith in it, therefore they will try to come up with answer after answer. The public will be deceived yet again. Even after your eyes have been opened, they may be shut again.

Here are some more scriptures provided to me by my brother & evangelist, Branden Freeland of Missouri, that you may wish to study up on:

The Day of The Lord is At Hand, but its NOT too late to “be on His side” … all you have to do is surrender. Pray this prayer in whatever form you like (as long as its genuine).

Lord God, I may not know you, but I want to know you. Lord, I’m a sinner, but I know you took care of that by giving your Son for me in whom now lives at your right hand on The Throne of Heaven; If I only believe shall my forgiveness come to pass … Lord, I believe in you. Please come into my heart, forgive me of my sins and walk with me all the days of my life, one step at a time. In Jesus’ Name! Amen!

If you prayed this prayer, pick up a Bible and begin reading. As well, feel free to contact us through this website. We’d love to chat with you and offer up prayer and encouragement.

Please use the buttons below to TWEET & SHARE this post ... and leave your thoughts & feelings in the COMMENT SECTION by scrolling down ... If you haven't joined TRUTH PREMIUM, what are you waiting for? Click Here
19
SHARES
ShareTweet
0 0 votes
Article Rating
Subscribe
Connect withD
Login
Connect withD
0 Comments
Inline Feedbacks
View all comments