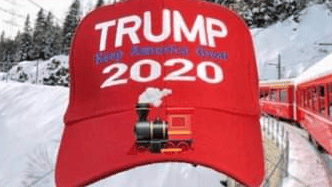 I’ve steered away from Facebook a lot the past few days due to the blatant censorship by these Socialist Freaks! I already told you many of these obvious stories like Facebook displaying only “1 viewer” on our Facebook Live Marathon Video last week when it was apparent that we had SEVERAL WATCHING JUST ON OUR TEAM ALONE; Not to mention, the hundreds of shares. We had 3,000 Views after just a COUPLE OF HOURS, but for some reason, the next morning, the TOTAL view count for that video was about 600! How blatant is that?

… and we’re not the only ones. Red-Pill Truthers & Conservative, Trump Supporting Patriots are complaining of the same problems across the internet.

I mean, if it didn’t piss ya off, It would be almost comical; Well it is … because they are losing … BAD, and that’s WHY they have to censor Truthful Patriots & Conservative Trump Supporters so much.

See, The Trump Train was a MOVEMENT and they tried stopping it from the very beginning, and they failed. I don’t know how they think they are going to stop it now, because the Choo-Choo is freighting straight ahead faster than ever before. What happens when a train goes faster and progresses down the tracks? It’s MORE DIFFICULT TO STOP!!! But these people are Evil, Sick & Desperate, because their TIME IS RUNNING OUT!

So, even though we’re seeing some major losses like the viewership above – on our videos – (or) THIS BREAKING HEADLINE and even more powerful example of conservative censorship and election meddling about one of our Comrade’s TRUMP TRAIN Groups being SHUT DOWN BY FEDBOOK less than 17 months away from Voting Day of The 2020 US Election …

I was scrolling Mewe (an alternative Free-Speech Social Network) this morning … Ya know, cause Fedbook is DYING and ALL! Obviously …

Here’s proof they are literally KILLING THEMSELVES with blatant 2020 ELECTION MEDDLING!

Did you know that on June 2nd, 2019 Corrupt Facebook disabled one of the LARGEST TRUMP FACEBOOK GROUPS called “Trump Train” which was 67,000 members strong at one point in time? Yea! they did … just because their COCKY … but that’s NOT ALL …

I got in touch with one of the Group’s Administrators this morning, Gary Pecorella, and he provided these screenshots and told me that after they disabled the group on June 2nd, that they REMOVED THE GROUP FROM FACEBOOK ‘ALL TOGETHER’ just this past Friday, June 7th!

Upon reviewing the screenshots he shared of the report, it appears that the group was flagged for ONE MEME BY ONE PERSON IN THE GROUP! Would they do this to a leftist-supporting group? Probably not … Why punish 67,000 members for one person’s meme, when all you have to do is flag that particular meme and if anything … punish that individual person?

The following screenshots show The Admin of The Group conversing with Facebook Support:

We think its blatant election meddling, considering all the facts across all of our sources providing similar stories about how they’ve been targeted by Facebook and Censored for SPEAKING THE TRUTH!

Tell us what YOU THINK? Is this Election Meddling?

Are Big Tech Giants getting TOO BIG AND TOO COCKY?

… more importantly … Who is going to hold Fedbook accountable? Will you do it?

Will President Trump do it? Can he? Let’s discuss down below in the comment section which is basically a CENSORSHIP-FREE ZONE!!!

ALSO … Make sure you SIGN UP FOR OUR EMAIL NEWSLETTER because WE CAN’T TRUST BIG TECH SOCIAL NETWORKS LIKE FACEBOOK ANYMORE! You can do that here!