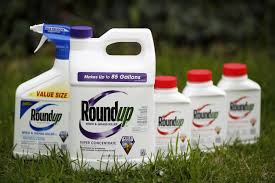 Bayer’s stock price hit an almost seven-year low Tuesday, in the wake of a third U.S. jury verdict that found its Roundup weedkiller to be a cause of people’s cancer.

A Californian jury said Monday that Bayer had to pay Alva and Alberta Pilliod, both of whom had used the herbicide that Bayer acquired via Monsanto last year, $2 billion in punitive damages and $55 million in compensatory damages. The Pilliods both have non-Hodgkin’s lymphoma.