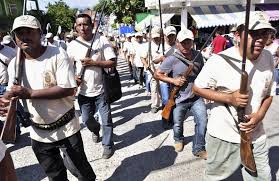 Report: Mexican Militias and cartel’s preparing to slaughter members of caravan in Tijuana

Prophesied 20 Days Ago: War With Mexico!

MIGRANTS FROM HONDURAS and GUATEMALA. They were told not to come; they came to Tijuana, Mexico anyway. When they arrived, they were told to leave; they stayed in defiance of locals. Tonight, the migrant caravan’s are slated to be attacked, with several high-profile LYNCHINGS as a warning to other migrants: Stay Out. Word has reached the Hal Turner Radio Show that tonight will commence several days of horrific violence against so-called “migrants” who forced their way into Mexico from Honduras and Guatemala. We are told that LYNCHINGS are planned. Tijuana residents are furious and protesting, threatening a major beat down. Stay inside if you’re Mexican, leave the country ASAP if you want to stay alive & you’re a migrant.

Mexican “militia” or cartel enforcers are going to take action, likely at night, planned in the next 24 hours. Expect bloody consequences to the caravan migrants. Cartel modus operendi will be mass hangings in semi-public places, as a warning to future caravan members. Will various groups try to retaliate? What will spill over to the US? Claiming they wanted “asylum” these so-called migrants were OFFERED asylum by — and in — Mexico. Instead, they declined Mexico’s Asylum offer and said they intended to get into the United States because . . . they want jobs.

… if you have any NEWS related to The Migrant Caravan, We’d like to hear your story / news tip! Please CONTACT US!