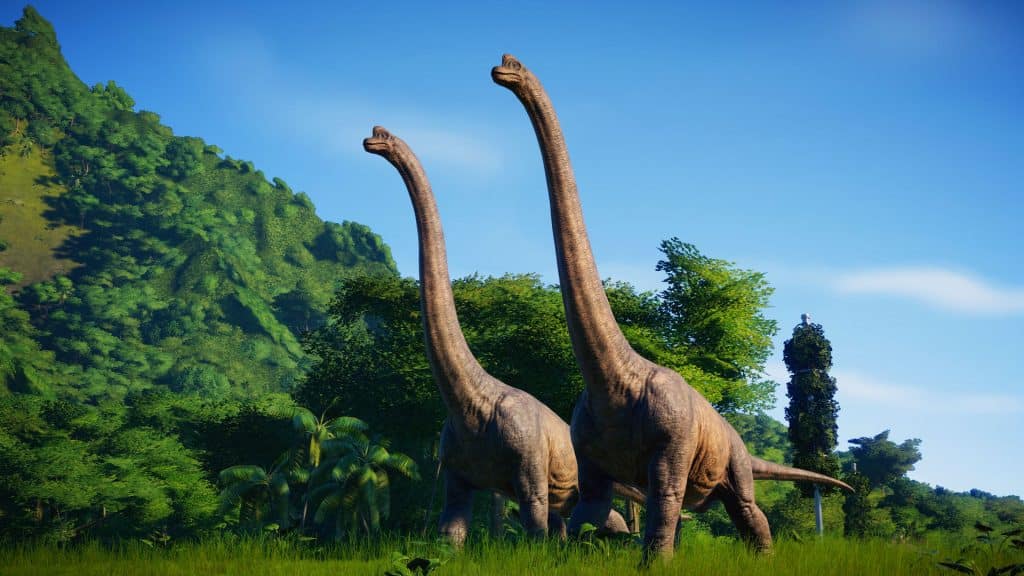 Does The Bible Speak of Dinosaurs in Job 40-41?

For many years young-earth creationists have pointed to the book of Job, chapters 40-41, as evidence that dinosaurs lived recently. In order to set the record straight, let’s examine this passage of scripture, and see what the possibilities are. I may surprise a few old-earth creationists by my conclusions with this one. First, let’s read the portion of Job 40 that is in question, in the King James Version.

15 Behold now behemoth, which I made with thee; he eateth grass as an ox.

16 Lo now, his strength is in his loins, and his force is in the navel of his belly.

17 He moveth his tail like a cedar: the sinews of his stones are wrapped together.

19 He is the chief of the ways of God: he that made him can make his sword to approach unto him.

20 Surely the mountains bring him forth food, where all the beasts of the field play.

21 He lieth under the shady trees, in the covert of the reed, and fens.

22 The shady trees cover him with their shadow; the willows of the brook compass him about.

23 Behold, he drinketh up a river, and hasteth not: he trusteth that he can draw up Jordan into his mouth.

24 He taketh it with his eyes: his nose pierceth through snares.

First, behemoth represents a dinosaur. This is the view of the young-earth theorists. They claim the “moveth his tail like a cedar” is referring to a sauropod dinosaur (a “saurapod” is a plant-eating dinosaur, such as Apatosaurus, Diplodicus, etc.) However, it is not without problems.

I see three problems with this interpretation. First, while most of the passage could be attributed to a sauropod, verse 23, in which he “drinketh up a river”, does not sound like a sauropod. The New American Standard version states “If a river rages, he is not alarmed; He is confident, though the Jordan rushes to his mouth. Given the smallness of the sauropod’s mouth, this is unlikely.

The second problem with the sauropod interpretation is verse 21. The KJV is good, but a more literal translation is better here. The NASB says, “Under the lotus plants he lies down, The willows(reeds) of the brook surround him.” It is difficult to imagine the Argentinosaurus, at 100 feet long, and a height of 70 feet when standing (sitting, probably 20 feet), resting under the limbs of a lotus plant (or, tree), nor would he be able to take cover in reeds only a few feet tall.

The last problem I see with this interpretation is verse 18. The NASB says, “His bones are tubes of bronze, His limbs are like bars of iron.” No dinosaur has ever had metal bones.

However, these three problems don’t prove conclusive enough to claim that behemoth was not a dinosaur, so the possibility remains that the sauropod interpretation is correct. With that said, there is one final thought to ponder…since there is no physical evidence (fossils) of dinosaurs that lived in the past 6,000 years, this interpretation cannot possibly be correct.1

Second, many modern scholars interpret behemoth to be a hippopotamus. This appears to be the most likely explanation. The hippo theory solves the problem with verse 23, and drawing up the Jordan into his mouth. The gaping mouth of the hippo provides adequate credence to this verse. And in verse 21, the hippo can easily rest under shade trees, and hide in the reeds. However, there are two problems with this theory. First, back to verse 17 and the tail like a cedar…this is not at all like the tail of a hippopotamus. Second, the same problem exists with verse 18, and the bronze bones.

You can see from these two interpretations, that neither of them is perfect. Before we give the other two possibilities, lets look at leviathan (Job 41:1-34);

1 Canst thou draw out leviathan with an hook? or his tongue with a cord which thou lettest down?

2 Canst thou put an hook into his nose? or bore his jaw through with a thorn?

3 Will he make many supplications unto thee? will he speak soft words unto thee?

4 Will he make a covenant with thee? wilt thou take him for a servant for ever?

5 Wilt thou play with him as with a bird? or wilt thou bind him for thy maidens?

6 Shall the companions make a banquet of him? shall they part him among the merchants?

7 Canst thou fill his skin with barbed irons? or his head with fish spears?

8 Lay thine hand upon him, remember the battle, do no more.

9 Behold, the hope of him is in vain: shall not one be cast down even at the sight of him?

10 None is so fierce that dare stir him up: who then is able to stand before me?

11 Who hath prevented me, that I should repay him? whatsoever is under the whole heaven is mine.

12 I will not conceal his parts, nor his power, nor his comely proportion.

13 Who can discover the face of his garment? or who can come to him with his double bridle?

14 Who can open the doors of his face? his teeth are terrible round about.

15 His scales are his pride, shut up together as with a close seal.

16 One is so near to another, that no air can come between them.

17 They are joined one to another, they stick together, that they cannot be sundered.

18 By his neesings a light doth shine, and his eyes are like the eyelids of the morning.

19 Out of his mouth go burning lamps, and sparks of fire leap out.

20 Out of his nostrils goeth smoke, as out of a seething pot or caldron.

21 His breath kindleth coals, and a flame goeth out of his mouth.

22 In his neck remaineth strength, and sorrow is turned into joy before him.

23 The flakes of his flesh are joined together: they are firm in themselves; they cannot be moved.

24 His heart is as firm as a stone; yea, as hard as a piece of the nether millstone.

25 When he raiseth up himself, the mighty are afraid: by reason of breakings they purify themselves.

26 The sword of him that layeth at him cannot hold: the spear, the dart, nor the habergeon.

27 He esteemeth iron as straw, and brass as rotten wood.

28 The arrow cannot make him flee: slingstones are turned with him into stubble.

29 Darts are counted as stubble: he laugheth at the shaking of a spear.

30 Sharp stones are under him: he spreadeth sharp pointed things upon the mire.

32 He maketh a path to shine after him; one would think the deep to be hoary.

33 Upon earth there is not his like, who is made without fear.

34 He beholdeth all high things: he is a king over all the children of pride.

As before, there are two main theories concerning leviathan.

First, according to some young-earth believers, leviathan is one of the sea dinosaurs. Ken Ham, in his book The Answers Book, states that it may have been something like Kronosaurus or Liopleurodon (Page 243). The Institute for Creation Research calls Leviathan a dragon, and equates it to other passages in Isaiah and Revelation.3

What are the problems with this interpretation? First, verses 19-21 describe leviathan as breathing fire like a dragon. There are no known dinosaurs, sea-going or otherwise, that had the ability to breathe fire. Using this interpretation, it is not possible to take this passage literally. In addition, verse 31 says he makes the deep to boil like a pot. Is he so hot from breathing fire that he evaporates the water around him??? No dinosaurs had this capability.

The second theory, put forth by modern Bible scholars, is that leviathan represents a crocodile. This belief is held by Gleason Archer, in his book Encyclopedia of Bible Difficulties, and by Dr. Hugh Ross of Reasons to Believe. Archer makes a good case for the crocodile, however, using a literal translation, there is no possibility that this interpretation is correct. I’ve never seen, nor heard of, a fire-breathing crocodile.

We have seen that the dinosaur interpretation has problems. Nevertheless, Behemoth and Leviathan could represent dinosaurs, just as the young-earth theorists believe. However, there is no proof in the geologic record that man and dinosaurs lived together. With that said, I believe it is possible that God used the extinct dinosaur as an example for Job. He may have shown him an image, or created one on the spot, or merely talked about the dinosaur…nobody knows. One thing is for certain…the conversation between God and Job was one-way…with Job on the receiving end. Since he was receiving this scolding, he would not have interrupted God and asked him what a behemoth was. More than likely, he was trembling in fear, merely listening to God speak.

It is not out of the question that God could have used a pre-existing species as an example of his creative power. There is no doubt that God created the dinosaurs. They are a great testimony to his power, whether alive or dead. This option sounds very good, considering that there is no proof of dinosaurs living only 6,000 years ago.

Behemoth and Leviathan represent angelic creations of God, on the same level as the Seraphim and Cherubim. They were never intended to live on earth, but merely served as God’s example in this story. As such, we have no clue what their role is in God’s creation. Given the impossible literal interpretation of leviathan, this is an attractive theory. However, it is not without problems. In Psalm 74, Leviathan was killed and given to the beasts of the field for meat. You could not do this for an angelic being!

I agree with Ken Ham of Answers in Genesis…there simply isn’t enough evidence to decide conclusively. However, there is one certainty about Job 40-41…they are not dinosaurs that lived 6,000 years ago. With the possibilities presented, I leave it up to the reader to decide for themselves what the correct answer is. We probably won’t know for certain until we get to heaven.

What do I believe? I lean toward the dinosaur theory. You may say, “How can Bible writers, such as David in Psalm 74, write about a dinosaur if it lived 65 million years ago?” This is simple. There were certainly dinosaur fossils available in Bible times. They are in the rocks now, so they must have been in the rocks then. David, and others, probably saw these fossils, and wrote about them). This interpretation does not harm the inerrancy of the Scriptures.

Copied with permission from PlrPlr.com!