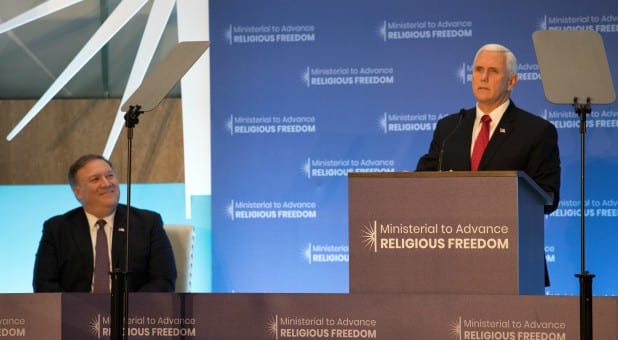 Vice President Mike Pence asked for believers across the nation to pray for missionary Andrew Brunson. The Turkish government moved the persecuted pastor from the jail cell to house arrest on Wednesday.

“This is a welcome first step, but it is not good enough,” Pence said at the Ministerial for Religious Freedom. “I spoke to Pastor Brunson and his wife, Norine, yesterday. I know that his faith will sustain him, but it shouldn’t have to. Pastor Andrew Brunson deserves to be free. Today, we’re honored to be joined by a member of his family, his daughter Jacqueline. To Jacqueline, I promise you: As I told your father yesterday, President Trump and I will continue to fight to secure your father’s full release until he is restored to your family and returns to the United States of America.

“To believers across America, I say: Pray for Pastor Brunson. While he is out of jail, he is still not free.”

“And to President Erdogan and the Turkish government, I have a message on behalf of the president of the United States of America: Release Pastor Andrew Brunson now, or be prepared to face the consequences,” Pence said. “If Turkey does not take immediate action to free this innocent man of faith and send him home to America, the United States will impose significant sanctions on Turkey until Pastor Andrew Brunson is free.”