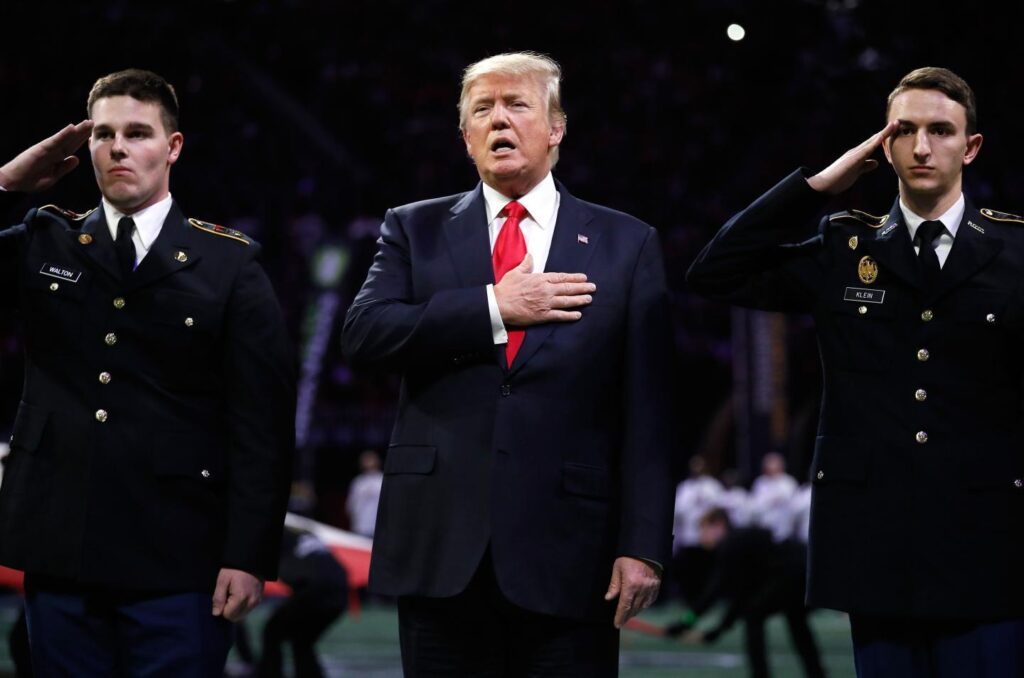 Last year, Trump described players who went down on one knee during the anthem as “sons of bitches”…

(Chris Lefkow, AFP) Washington – US President Donald Trump said Thursday that American football players who refuse to stand for the national anthem — most of whom have been African Americans protesting police brutality — maybe “shouldn’t be in the country.”

Trump’s controversial remarks came as video emerged of another questionable encounter between US police and a young black man — this time a professional basketball player.

Trump welcomed the new National Football League (NFL) rule that players must stand during “The Star-Spangled Banner” at games unless they stay in the locker room.

“NFL owners did the right thing if that’s what they have done,” Trump said.

NFL: Players Must Stand for Anthem or Stay in Locker Room

‘If anyone is on the field and is disrespectful to the anthem or the flag, there will be a fine…’

(AFP) National Football League owners reached agreement Wednesday on a policy requiring players to stand during the national anthem but giving them the option of remaining in the locker room if they preferred.

The issue of how to handle player protests of kneeling during the pre-game playing of “The Star-Spangled Banner” has loomed over the NFL club owners meeting in Atlanta, with the sport anxious to avoid a repeat of the controversy that divided the league last season.

America’s most popular sport found itself at the center of a political firestorm in 2017 after President Donald Trump described players who kneeled during the anthem to draw attention to racial injustice as “sons of bitches.”

The remarks prompted a wave of protests across the league in September, angering some fans and placing several conservative, Trump-supporting team owners in an awkward position.

With the NFL’s leadership reluctant to issue a blanket decree ordering players to stand for the anthem, the deal approved Wednesday represents a compromise.

Under current NFL regulations, all players are required to be on the field during the anthem

Read The Rest Here! and Leave Your Comments Below!