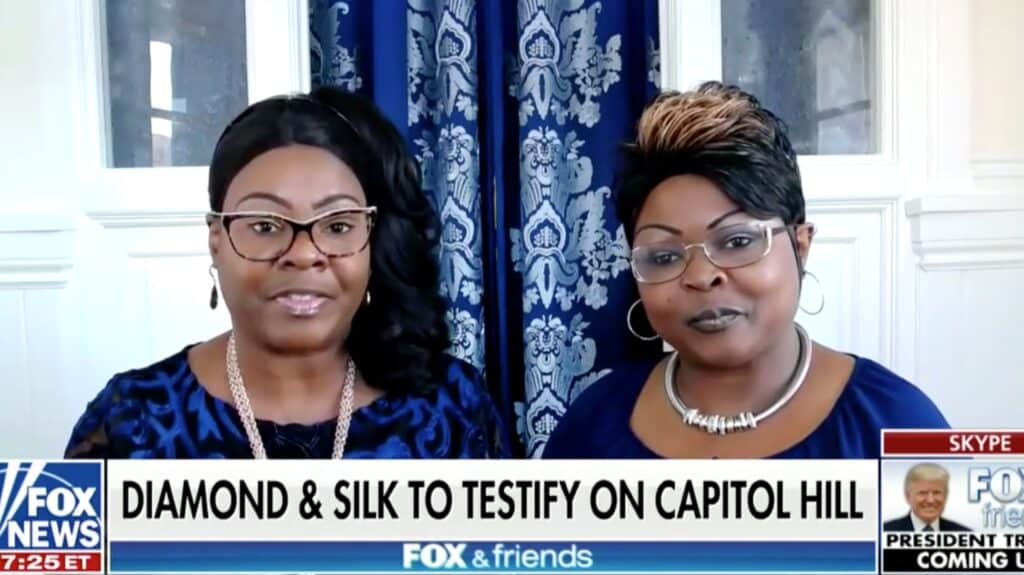 On Thursday, Diamond and Silk showed they are dangerous — not to some amorphous “community,” but to pretentious liberal Democrats who make the mistake of talking down to the two articulate women.

Johnson and his condescending act didn’t come off well at all.
[He accused them of just wanting to make money – NOT RIGHT! AT ALL!]

“I’ve always heard that diamonds are a girl’s best friend…,” he began at one point.

“They’re hard, too. And if I got to be hard with you and firm, I will,” she said. “You’re not going to brush us off and dismiss us like we don’t have merit here. These people censored us for no reason. They put limitations on our page for no reason. And that was wrong …”

Diamond and Silk SHUT DOWN Democrat Sheila Jackson Lee (D-TX) at the House Judiciary Committee on Facebook censorship of conservative websites on April 26, 2018.

Sheila Jackson Lee first asked Ms. Hardaway if she was ever paid by the Trump campaign.

Sheila Jackson Lee: Have you ever been paid by the Trump campaign?

Lynnette Hardaway (Diamond): No. We’ve never been paid by the Trump campaign.

Lynnette Hardaway (Diamond): No. We have never been paid by the Trump campaign.

This was just excellent!

Diamond and Silk handed it to her.
BOOM!

It appears to us that Rep. Jackson has no respect not only for the First Amendment but for the hearing in general! The head hancho guy said her time was up over and over. This isn’t how a professional acts. Furthermore, She’s also just plain “dumb”. She can’t seem to understand that Diamond & Silk told the Laura Ingrahm show on April 11th they had not been in direct contact with Facebook and THEN ON THE 12TH THEY WERE!!! ITS COMMON F*CKIN SENSE YOU LIBTARD! sorry I have no respect for those who have no respect for We The People! You WILL be removed from your office!