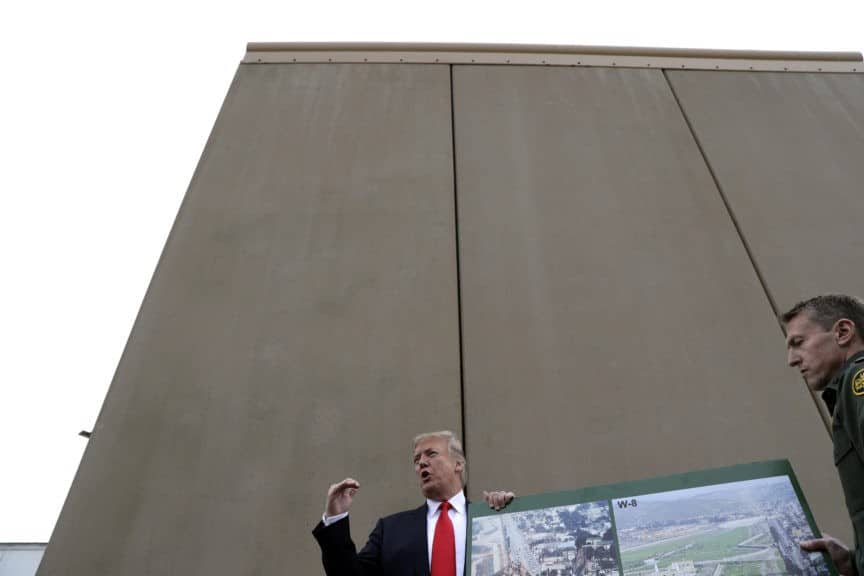 Trust The Plan: It Appears Trump May Have Snuck In Border Wall Funding Into Disputed Omnibus Bill

When President Donald Trump signed the “ridiculous” and massive $1.3 trillion omnibus spending bill on Friday, he himself decried the “wasteful spending” and “giveaways” to Democrats that had been tucked into the legislation while he also vowed to never sign another bill like it.

Many conservatives were also incensed at the obscene spending bill, most notably due to continued taxpayer funding for abortion provider Planned Parenthood and sanctuary cities, but also because it seemed like Democrats completely blocked Trump’s efforts at building a wall to secure the southern border, granting him a paltry $1.6 billion to repair existing border fences.

The lone obvious bright spot of the spending bill was the ample funding — more than had been requested actually — for the military, which Trump repeatedly made note of.

But while many set their hair on fire and appeared to jump off the Trump train in dismay as Democrats cheerfully crowed about how they had stymied a major part of Trump’s agenda, others kept a level head and began to dig deep among the 2,200-plus pages — and all referenced statutes mentioned therein — in search of some hidden reason why the president had signed this bloated spending bill into law instead of sending it back with a veto.

That search was bolstered somewhat by a letter sent on Saturday from the White House to both chambers of Congress which cited a specific statute from the funds-governing 1985 Budget Control Act in relation to a specific section of the new spending bill and declared that certain funding had been designated as an “emergency requirement,” which some believe grants the president legal authority to shift funds around and prioritize spending — or even not spend at all — certain funds in relation to declared emergencies, in this case specifically as they pertain to national defense.

Thus, theories began to circulate that Trump had somehow snuck funding for the oft-promised border wall past the not-so-watchful eyes of arrogantly ignorant Democrats — and a few establishment Republicans — opposed to his agenda who didn’t bother to carefully read the bill … as if they even had time to do so if they wanted to, perhaps by cynical design of both sides.

Consider that the New York Post reported that during the signing ceremony on Friday, Trump had stated, “I want to address the situation on border security, which I call national defense. I call it stopping drugs from pouring across our border. And I call it illegal immigration. It’s all of those things.”

“But national defense is a very important two words,” he added. “Because by having a strong border system, including a wall, we are in a position, militarily, that is very advantageous.”

Then Trump tweeted on Sunday, “Because of the $700 & $716 Billion Dollars gotten to rebuild our Military, many jobs are created and our Military is again rich. Building a great Border Wall, with drugs (poison) and enemy combatants pouring into our Country, is all about National Defense. Build WALL through M!”

Because of the $700 & $716 Billion Dollars gotten to rebuild our Military, many jobs are created and our Military is again rich. Building a great Border Wall, with drugs (poison) and enemy combatants pouring into our Country, is all about National Defense. Build WALL through M!

That has been understood by some to insinuate that Trump intended to immediately begin to build the border wall by way of the military with use of military funding — most likely through the U.S. Army Corps of Engineers — as he has previously declared the drug problem to be a “national health emergency” and specified border security as part of “national defense.”