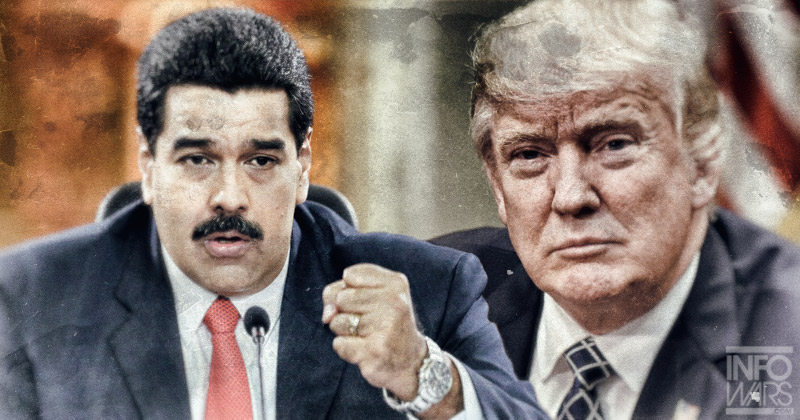 This was first published on INFOWARS:

Venezuelan President Nicolas Maduro lashed out at President Trump following his blistering UN speech Tuesday, calling him the “new Hitler of international politics.”
The scathing remarks by the socialist dictator were retaliation for Trump’s comments about Venezuela’s “faithful” implementation of socialism which have resulted in riots, mass starvation, and bankruptcy in the country.

“The Venezuelan people are starving and their country is collapsing. Their democratic institutions are being destroyed. This situation is completely unacceptable and we cannot stand by and watch.”

“I ask every country represented here today to be prepared to do more to address this very real crisis,” he added.

Maduro, who was not present at the UN assembly, reacted angrily from Caracas.

“Nobody threatens Venezuela and nobody owns Venezuela,” Maduro said, adding that the speech was an “aggression from the new Hitler of international politics, Mr. Donald Trump, against the people of Venezuela.”

Bizarrely, Maduro even went as far to say that Trump had publicly announced his intention to assassinate the dictator, even though all Trump said was that the U.S. was “prepared to take further action.”

“Donald Trump today threatened the president of the Bolivarian Republic of Venezuela with death,” Maduro said.

The irony of an authoritarian socialist dictator calling Trump “Hitler” should not be lost on anyone.

Maduro has been ruthless in his struggle to control his people over the summer as food shortages grow, riots increase, and inflation skyrockets.

The social unrest is inevitable considering Venezuela’s economy has contracted 20% and inflation has soared to over 800%, according to central bank figures.

Venezuela has also become so poor through socialist policies that their currency, the bolivar, is now worth less than the fake digital gold in the popular online-role playing game “World of Warcraft.”