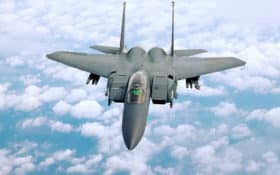 The U.S. military said it shot down an Iranian-made, armed drone in southern Syria on Tuesday, marking the third time this month that that the U.S. has downed aircraft affiliated with Syrian President Bashar Assad’s government.

The message is clear: Back off.

The U.S.-led coalition fighting the Islamic State group said a U.S. F-15 fighter jet shot down the drone “after it displayed hostile intent” while approaching a military camp near the Syria-Jordan border. A similar drone was shot down in the same location after it dropped munitions near coalition forces on June 8.