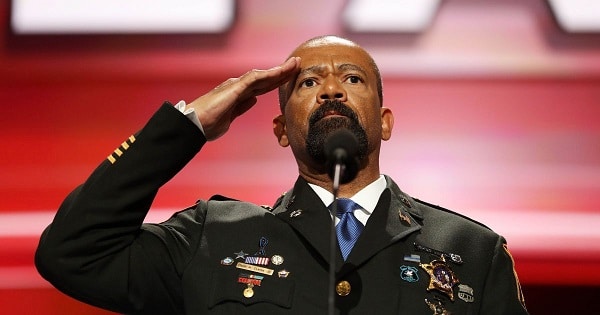 This Man’s Son Viciously Attacked and Brutalized by Thugs, Sign The Pledge To Elect Sheriff Clarke Into The Senate !!!

By now you’ve heard about the young black thugs who viciously attacked and brutalized my teenaged son because he expressed support for Donald Trump.

These dreadlock-wearing punks shrieked “F*** Donald Trump” in this gentle boy’s face over and over again as they cornered him, and cast repeated insults about white Americans.

Barack Obama has many blacks, Muslims, and illegal aliens feeling they have the right to attack Trump supporters, cops, businesses, white kids – anything and anybody – without going to jail or getting deported.

I’m sick of it, and I’m doing something about it.  My wife and I have launched the National Campaign to lay the groundwork for SHERIFF DAVID CLARKE to run for the United States Senate in Wisconsin to replace Left-wing lesbian extremist Tammy Baldwin!

Fourteen years ago he was calling liberal black state legislators “race hustlers and demagogues.”  He called Al Sharpton a “charlatan,” and said he “should shut up and go back into the gutter.”

He told Ryan and McConnell: “Get it done, dammit.  We’ve waited long enough.  Note to Paul Ryan, Mitch McConnell: Go big, go bold, go fast.  The disconnect in DC with GOP and voters: McConnell thinks the goal is to move cautiously.  WE VOTED FOR THEM TO GO BIG & BOLD.”

You know what he told the crowd at President Trump‘s inaugural “Deplora-Ball”?  He’s tired of the do-gooders saying we have to “reach across the aisle” and make compromises: “The only reason I’ll be reaching across the aisle is to grab one of them by the throat!”

Does your Senator talk like that?  Does he urge black voters to “leave the Democrat plantation”?  Does he say, “I’m tired of this race card thing”?

Does your Senator post this on Facebook? “Islam: Don’t Try to Understand ‘Sick Ideology’ of Islamism; Destroy It.”

NO!  With a precious few lonely exceptions (Ted Cruz and Mike Lee come to mind), your Senator does NOT speak like that, because nobody in Washington does.

This man deserves a bigger stage, and he is willing to run: he just has to know that he has enough national support to combat the LGBTQ money his opponent will get from Hollywood and elsewhere.  Tammy Baldwin is their Holy Grail: a hard left, openly lesbian, in-your-face, screaming liberal.  SHE MUST GO!

Sheriff Clarke is the real deal.  In speeches he quotes Judge Robert Bork and Thomas Sowell.  He patrols Milwaukee on horseback, and lists his heroes as Justice Scalia, Clarence Thomas, President Reagan, and John Wayne.  He tells Trump rallies, “You guys know I don’t take no crap from the Left, and I’ll get my knuckles bloody when I have to.”

How can you not love this man?  Leave us your comments in the section below …