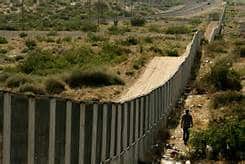 
Did You Hear The Great News? Wall Is Being Built …

Have you heard the great news?

President Donald Trump has just signed an Executive Order today to finally build the wall on our border with Mexico!

Mexico isn’t happy with “The Don”. They realize he’s serious about making THEM pay for the wall now!

Mexico may have realized the reality of the situation most starkly after President Enrique Peña Nieto canceled an upcoming meeting with Trump after Trump signed several executive orders dealing with immigration, which included construction of a border wall and a start of the process to renegotiate the North American Free Trade Agreement.

Unfortunately for Mexico, the country’s apparently tough stance in the face of a determined President Trump did not sit well with the global currency market, as the Mexican peso plummeted all across the board, FX Street reported.

The purpose of this order is to direct executive departments and agencies (agencies) to deploy all lawful means to secure the Nation’s southern border, to prevent further illegal immigration into the United States, and to repatriate illegal aliens swiftly, consistently, and humanely.

(a)  secure the southern border of the United States through the immediate construction of a physical wall on the southern border, monitored and supported by adequate personnel so as to prevent illegal immigration, drug and human trafficking, and acts of terrorism;

(b)  detain individuals apprehended on suspicion of violating Federal or State law, including Federal immigration law, pending further proceedings regarding those violations;

So you heard it yourself taken straight from the WhiteHouse.gov website. The Executive Order has been signed by President Donald Trump to enact the wall and enforce stricter immigration laws.