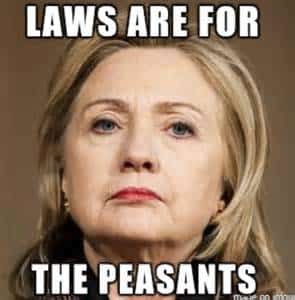 “The Investigation Continues” Into The Clintons

Congressman Jason Chaffetz overseas The House Oversight Committee, and the ongoing investigation into The Clinton Email Scandal. He has previously attacked Jim Comey on his failure to prosecute Hillary Clinton for her misuse of her private email server handling classified material.

We, just like many of you, want to see The Clintons brought to justice for their abominable crimes including sexual abuse and murder to be the worse, but this is a start. We’ll take it for starters …. for STARTERS!

“Congressman Jason Chaffetz, head of the House Oversight Committee, published a photo of himself greeting losing Democratic presidential candidate Hillary Clinton at Friday’s inauguration ceremony, teasing, “the investigation continues,” with no other comment.

“So pleased she is not the President,” Chaffetz wrote on Instagram, where he posted the photo. “I thanked her for her service and wished her luck. The investigation continues.”

As House Oversight chairman, Chaffetz played a significant role in investigating Clinton following the revelation that she had used an unsecured private email server to save classified documents she came into contact with in her capacity as Secretary of State. Chaffetz has personally demanded an FBI investigation into Clinton, arguing that Clinton’s claim she was unaware of her breach of security protocol did not match the evidence the FBI had initially uncovered. Chaffetz was extremely critical of FBI director James Comey’s decision not to prosecute Clinton for her actions, and vowed to continue the investigation following Clinton’s defeat in the 2016 presidential election.”

The Added Significance of National Pizza Day This Year ... "The Silent War Continues" | Eternal Affairs Media | the truth powered by The Truth | What Will You Believe?

[…] was Hillary Clinton’s Campaign Manager in 2016. Wikileaks emails reveal a butt-load of evidence of crimes against children and humanity, including the MURDER OF DNC STAFFER, SETH RICH who is believed to be the one that leaked the […]