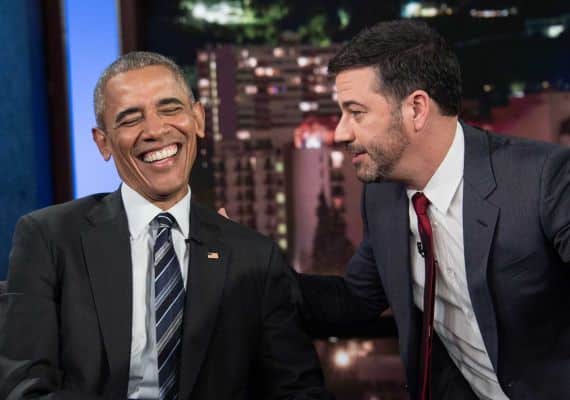 President Obama appeared on Jimmy Kimmel Live on Monday the 24th of October; possibly his last appearance as President of The United States. His viewpoints have always suggested he is an elitist at heart and disturbed many American Patriots, but what he does this particular evening on Jimmy Kimmel Live literally INSULTS AMERICAN VOTERS!
Even though only 4 out of 10 Americans believe that the election is NOT rigged, President Obama continues to laugh at the majority of Americans. In addition, considering the false polls and liberal media are biased, the true polls show Trump winning by a Landslide. (They won’t tell you this on Mainstream News!!!) … In addition, Obama insults the majority of Americans again (by laughing at the only true secular hope for America, Donald Trump).
Obama is an egotistical, pompous pig! He thinks he’s better than Trump because he has duped the American people especially blacks for 8 years in office.
Here some snippet’s from the “Liberal Atlantic” on this event:

Things started cheerily enough, with the president’s appearance on Kimmel’s semi-regular series, “Celebrities Read Mean Tweets.” It was Obama’s second time participating in that—dramatically reading the criticisms people had tweeted at his expense—and an extremely funny one. Some of the tweets the president read:

— Barack Obama is the Sharknado of presidents. Loud, stupid and over-hyped. #sharknado4

— Obama couldn’t negotiate getting a whopper without pickles.

— I just found out my daughter shares a birthday with Obama. PUKE!

— My mom bought a new conditioner and it sucks. It isn’t even conditioning my hair. I blame Obama.

Obama concluded his reading, however, with a specially selected mean tweet: “President Obama will go down as perhaps the worst president in the history of the United States!”

He paused again, getting the timing perfectly.

“Well, @realdonaldtrump, at least I will go down as a president,” Obama said. Then he dropped the mic smartphone.