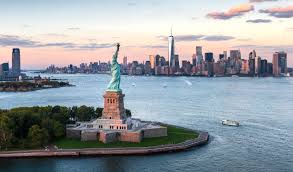 This is Divine Providence From GOD ALMIGHTY. Has not been published elsewhere!

Revelation 17, Where The Bible Speaks About The Ruling Elite

by Curtis R Bizelli / Watchman of The End Times | Eternal Affairs Media
@TruCurtBizelli
Revelation 17 King James Version (KJV)
First, Rev. 17 Ch. 1 mentions The Statue of Liberty that sits on many waters and represents the fornication and drunkedness of The End Time Babylon, AMERICA!
“And there came one of the seven angels which had the seven vials, and talked with me, saying unto me, Come hither; I will shew unto thee the judgment of the great whore that sitteth upon many waters”

3 So he carried me away in the spirit into the wilderness: and I saw a woman sit upon a scarlet coloured beast, full of names of blasphemy, having seven heads and ten horns.

4 And the woman was arrayed in purple and scarlet colour, and decked with gold and precious stones and pearls, having a golden cup in her hand full of abominations and filthiness of her fornication:

5 And upon her forehead was a name written, Mystery, Babylon The Great, The Mother Of Harlots And Abominations Of The Earth.

7 And the angel said unto me, Wherefore didst thou marvel? I will tell thee the mystery of the woman, and of the beast that carrieth her, which hath the seven heads and ten horns.

8 The beast that thou sawest was, and is not; and shall ascend out of the bottomless pit, and go into perdition: and they that dwell on the earth shall wonder, whose names were not written in the book of life from the foundation of the world, when they behold the beast that was, and is not, and yet is.

9 And here is the mind which hath wisdom. The seven heads are seven mountains, on which the woman sitteth.
10 And there are seven kings: five are fallen, and one is, and the other is not yet come; and when he cometh, he must continue a short space.
IS THE BIBLE SPEAKING ABOUT THE NEXT “US PRESIDENT” AFTER OBAMA? OR MAYBE SPEAKING OF OBAMA HIMSELF. I’M NOT SURE!
11 And the beast that was, and is not, even he is the eighth, and is of the seven, and goeth into perdition.
Holy Text actually speaks about The Ruling Elite that decide everything in the world behind closed doors. The Bible speaks of 10 Kings WITHOUT KINGDOMS AS OF YET! How can a man be a King without a Kingdom? … if he is ruling with the help of a Spokesman.
This is in Rev 17:12
“And the ten horns which thou sawest are ten kings, which have received no kingdom as yet; but receive power as kings one hour with the beast.”
13 These have ONE MIND, and shall give their power and strength unto the beast.
The truth about The Bilderberg Group and other shadowy, secular organizations is they work together with one mind. As a matter of fact The Bilderberg group is known to meet secretly every 2-4 years. They get together and discuss when war will take place, who the next president will be and so much more.

14 These shall make war with the Lamb, and the Lamb shall overcome them: for he is Lord of lords, and King of kings: and they that are with him are called, and chosen, and faithful.

JESUS WILL DEFEAT THEM IN THE END!
15 And he saith unto me, The waters which thou sawest, where the whore sitteth, are peoples, and multitudes, and nations, and tongues.
We have a lot of different nationalities and languages in America. This is truth.
16 And the ten horns which thou sawest upon the beast, these shall hate the whore, and shall make her desolate and naked, and shall eat her flesh, and burn her with fire.
I believe the ten horns also symbolize the ruling elite of the world in which want globalism. They want to kill nationalism. As a matter of fact they hate every aspect of American culture and way of life. They’ve killed off God in this country, are calling True Patriots = Terrorists, want to do away with The US Constitution and depopulate the world so they can rule.
17 For God hath put in their hearts to fulfil his will, and to agree, and give their kingdom unto the beast, until the words of God shall be fulfilled.
The elite are very smart. Even though they are either Jews or Satanists, they believe they are God or have a divine calling from God. Honestly, in their own minds they feel they are fulfilling “what is right for the world” and in the end THEY ARE!
18 And the woman which thou sawest is that great city, which reigneth over the kings of the earth.
USA is the hub of the world, and soon we will have a One World Government!

To God be The Glory for these revelations. Hold steadfast to prayer, read your Bible! God bless America & long live the Republic! May God’s Will be Done on earth as it it is in Heaven!