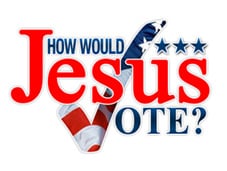 I jolted up from a very odd dream this morning. I’ve had odd dreams before that we’re fueled by the power of God, but nothing like this. It was 2:15am when I noticed the time and felt The Holy Spirit move over me. In my dream I was carried away by my ambitions at night, and so were many others to a place where people were in costume or cloned. People were paying to be in costume or cloned. There was a large tractor trailer / semi shining bright lights and images in the middle of the night sky offering a “fun time”.

After I went, I was disappointed and a met with a police officer who took me to a psychic reading. I know psychics are evil and don’t believe in The Bible but this one handed me a giant leather bound book that appeared to be a bible. When I opened it up the words stood out at me, “Vote 3 2016” … in which in the dream, I had read earlier that night before being hauled off by the semi.

That’s when I was jolted awake at just after 2am.

Now awake, I was puzzled. I thought & thought what the dream meant. I wondered if their was a 3rd option in the election? Were we to vote for the antichrist? I asked God what “Vote 3 2016” meant and He replied, “The Trinity”. I INSTANTLY FELT THE HOLY SPIRIT LIKE A TIDAL WAVE!

Yes, it’s important that we vote soberly this 2016 election, but above all else God wants to win SOULS! We don’t have much time left before The Rapture of The Church and God hauls off all of those are saved in Christ Jesus.

He wants our #1 VOTE TO BE FOR HIM AND ONLY HIM! He wants us to put HIM first even above Trump, Hillary or whoever else.

It’s through sober judgment that we elect the next President of the USA, but we may not even be alive to see the next presidential reign with October already here.

God has been pouring out His Almighty Spirit onto those that love Him. I urge you to put aside all prejudices and call upon Him now. He still loves you. After you’re gone from this earth or God takes His chosen few, it will be too late.

Where the media spins things, you can’t hide where both parties stand on the issues that matter. Research the issues on their websites and consult The Trinity = GOD for Holy Wisdom and discernment of spirits.

But above all else …

VOTE FOR GOD THIS ELECTION! Give Your Soul to Jesus!