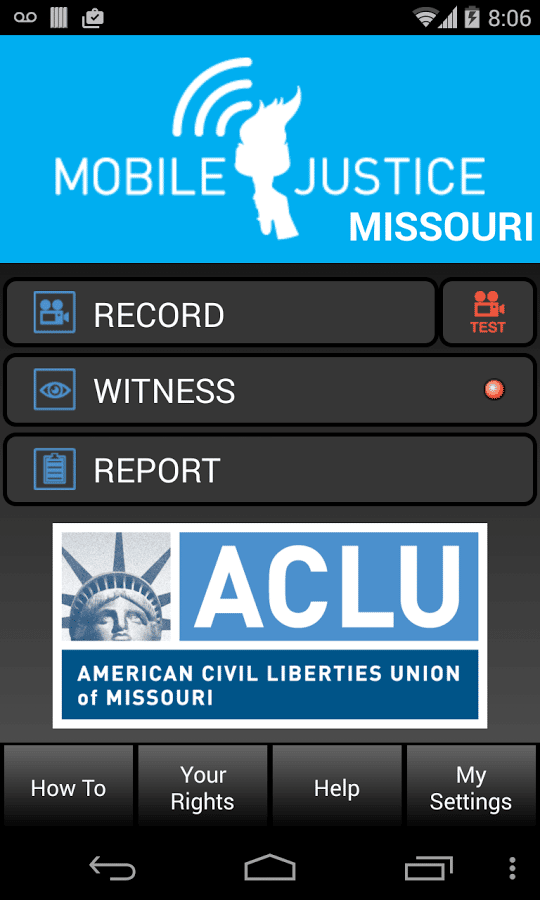 The American Civil Liberties Union of Missouri released the iPhone version of a smart phone app called the ACLU of Missouri Mobile Justice app — an empowerment tool for those who feel their civil rights are being violated by law enforcement officers.

The iPhone app, which can be downloaded for free through the ACLU of Missouri website, mirrors the Mobile Justice Android app released in November. They have three main functions and Know Your Rights information. Record allows citizens to capture exchanges between police officers and themselves or other community members in audio and video files that are automatically sent to the ACLU of Missouri. Witness sends out an alert when someone is stopped by police so that community members can move toward the location and document the interaction. Report gives the app user the option to complete an incident report and send it directly to the ACLU of Missouri for review. Know Your Rights provides an overview of what rights protect you when you are stopped by law enforcement officers.

The Mobile Justice Android app, released last November, has been downloaded approximately 2,500 times. “We’re expecting that number to double quickly because we had a lot of people asking when the iPhone version would be ready,” said Sarah Rossi, ACLU of Missouri director of advocacy and policy.

“Mobile Justice can be an effective and empowering tool for Missourians who want to exercise their right to record the police,” Rossi adds. “It also offers a handy ‘Know Your Rights’ section with a link to our website.” The affiliate has received 571 videos and 118 reports, but nothing that requires immediate action from the ACLU of Missouri.

The ACLU of Missouri is a non-partisan, not-for-profit organization that defends and expands the constitutional rights and civil liberties of all Missourians guaranteed under the United States and Missouri Constitutions, through its litigation, legislative and public education programs. It is an affiliate of the national ACLU.