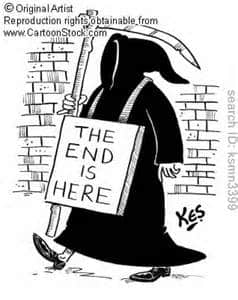 While the stereotypical image of a street wanderer plastered with signage front and back reading “The End is Near” may be somewhat old hat, a more technically advanced and recent message of the same nature declares that idea is now a thing of the past anyway.

This article explores some of the more technical aspects of the new message, “The End is Here.”

Ancient Talmudic sages believed man lives in a 6000 year period of time, represented in the Bible as the 6 days of creation. This theory is consistent with the scriptural teaching that says, “A day to the Lord is as a thousand years.” And this 6000 years measures from Adam, 4004 BC to 1996 AD.

Genesis 6:3 says men should live 120 years. But Moses also established the jubilee year that comes only once every 50 years. Considering both of these together – that the full length of ordained time for all of man is 120 jubilee years – also totals 6000 years (120×50).

Moses started a calendar in or around 1448 BC, when the children of Israel left Egypt. He also later writes the time of a man of Israel should be three score and ten (70) years. Considering this, again, in jubilee years, means 70×50, or 3500 years – but only 3430 “until” the jubilee period (the 50th 70). The earlier passage about 120 years is a promise for the lives of all man, which has now elapsed; while this passage about 70 years relates only to those descendent of the Mosaic religions, having a little time beyond what is promised to all. But also, Hezekiah added 15 years to the calendar of Israel in his time. So these 3445 (3430 + 15) years should measure from 1448 BC to 1996-7 (due to variations in when the years begin and end). And they do.

Scripture also tells of a number of persons who served in positions of influence for periods of forty years. Forty years seems to represent a certain sense of fulfillment in the services of one person, or one spirit of influence. If we surmise this to mean “a day” to the spirit is as forty years, then this also brings the times involved with the day of Pentecost into harmony with all these other calendars. We are today in the fiftieth (jubilee) forty-year period (1993-2033) from Pentecost (~33 AD), when the Holy Spirit fell in the third hour. That was about 8 to 9 am. This is in the range of 2/24ths to 3/24ths into the 24-hour period that began around sun up. Mapping this range into the present forty-year day (1993-2033), places it 3-1/3 years to 5 years into it. That would be about 1996 to 1998 – again, right on target with all these other measurements.

For those who would argue Old Testament teachings are no longer applicable in New Testament times, Jesus brings things up to date for them just the same.

Peter was to be the Lord’s high priest, who is responsible under Moses for national accountability to God once a year.  Matthew 18 records that Peter once asked Jesus, “How many times should I forgive my brother, until seven?” But this was soon after Jesus had ordained Peter as his “rock,” a term that consistently represents unchangeable words or information in scripture (as set in stone). And Peter was probably applying what Jesus had taught him about doing things by sevens. So, if Peter was living up to his new name in the eyes of the Lord here, then Jesus’ response, “I say not unto thee seven, but seventy times seven,” was probably not meant to counter, but to “build upon” what Peter already said. The total sum here then, could be equated as seven times seventy times seven, which is, again, 3430 – the exact same measure Hezekiah adjusted for us to 1996-7.

Then there are the times of Daniel, expressed as “time, times and a half (a portion).” These are three consecutive periods of time also referred to as the “three days” (or the prophetic days) of scripture. There is a lot of very valuable teaching associated with these throughout the Bible. This is even explained in Micah 7:15, which says the Lord would show His people marvelous things, “according to the days from their coming out of Egypt.” This seems to be the answer to the prayer of King David in Psalms 90:12, asking the Lord to “teach us to number our days, that we may apply our hearts unto wisdom.” Perceiving the Biblical and post-Biblical time periods of the three prophetic days of scripture is about the single most powerful revelation anyone can learn about the Bible because it opens up a whole lot of other avenues into deeper scriptural understanding.

For the sake of space here, the details of the study of the three prophetic days are omitted but summarized as beginning and ending with historical events described to Daniel as “the going forth of the commandment to restore and to build Jerusalem.” This phrase refers to three historical events of the same nature and caliber that delineated all three of the prophetic days based on 1000 year “times,” as follows: Joshua (with his command to go forth and cross the Jordan) to Artexerxes plus Hezekiah (1408 BC – 393 BC); Artexerxes (who ordered Jerusalem rebuilt) to King James, who gave the order to compile the first Bible for the people, which restored Jerusalem (place of peace) in the heart of the people and soon inspired the colonization (to build) of the New World (393 BC – 1607 AD); and, finally, King James to Ezekiel, whose testament begins at the river, “Chebar,” meaning, “extent of time” (1607 AD – 1997 AD). Ezekiel would ordain two periods of time, this one of 390 years (the “half” time) from King James and then 40 years thereafter.

It is in this one, final, ordained period of time for man – these forty years – that we all live today, and what we do in it determines if there will ever be another one.

The end is here.

– transcribed from AnonyMoses by Clay Wright, now available only in epub from www.lulu.com.