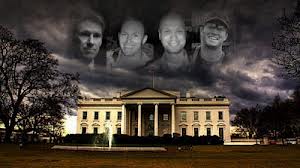 Talk about getting the graveyard shift.

Barack Obama has just announced Deborah Jones as his ‘replacement’ for the late Ambassador Chris Stevens.

Obama, the Commander-in-Chief who ‘Watched Them Die’ and then went off to bed, abandoned Stevens and three Americans to slaughter in Benghazi.

And ever since, Obama has spun a web of deceit, obstruction, and cover-ups that threaten to bring-down his Imperial Presidency.

Recently, we learned Obama is hiding the identities of as many as 30 survivors of the 9/11 Benghazi terror attack.

These survivors — American heroes, unlike Obama’s remote control drone operators — threaten to blow the lid on what really happened in Benghazi.

Frankly, Obama wants to keep the survivors of Benghazi ‘shut-up’.  He’s desperate to keep these witnesses from testifying before Congress — even in a closed session.

According to The Hill newspaper, Republicans in Congress are now threatening to subpoena these survivors of Benghazi.

‘Leadership has been exceptionally patient, but we’re getting to the point where there’s no other option’, vowed Rep. Jason Chaffetz, chairman of the House Oversight subcommittee on National Security.

This is the very least we can do to honor the memory of those who died.

Not a chance, Mr. President.

America doesn’t abandon its wounded into the hands of a bloodthirsty enemy on the battlefield.

Have You Signed the Petition to Impeach Obama?  Go Here to Sign

Congress must urgently investigate, subpoena, and hold congressional hearings to expose what could easily be the most treacherous scandal ever to rock the American Presidency.

Congress must appoint a House ‘Watergate Committee’ on Benghazi, with broad investigatory powers.

Thank you for helping Revive America to keep the heat on Congress.