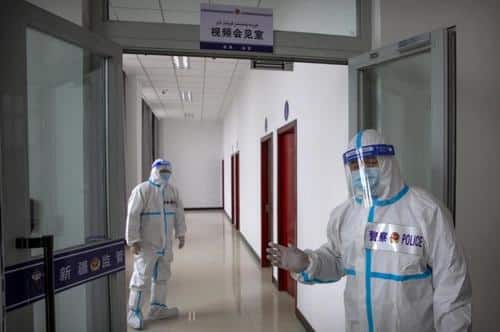 “Hundreds Of Thousands Have Disappeared” – Inside China’s Largest Detention Center

“Hundreds Of Thousands Have Disappeared” – Inside China’s Largest Detention Center

Biden is ramping up pressure on Beijing over its alleged human rights abuses in Xinjiang, which include – according to human rights groups – warehousing the Uygher Muslims who populate the far-western region in prisons that double as reeducation centers. The CCP says the Uyghers are receiving job training under the generous supervision of the state.

But while that excuse might fly in China’s state-controlled press, thanks in part to President Trump, the US no longer has illusions. Even Biden has been forced to burnish his tough-on-China credentials by following through on his threats.

His latest round of Hong-Kong-related sanctions and the international condemnation over Beijing’s alleged role in organizing massive cyberattacks including the infiltration of Microsoft Exchange has greatly irritated Beijing. The fact that they rug-pulled the Didi IPO shows how serious China is about weening its economy off of American capital and markets (while simultaneously propping up its own markets).

As Biden pushes ahead with the crackdown (much to the chagrin of those intelligence assets who partnered with Hunter Biden in that thinly -veiled influence-peddling operation) Beijing is apparently trying to convince the American public that claims of human rights abuses are overblown.

For that reason, it appears, the Chinese authorities granted reporters from the Associated Press a guided tour of Urumqi No. 3 Detention Center, one of the biggest detention centers in the country. It’s located in Dabancheng, a city in Xinjiang.