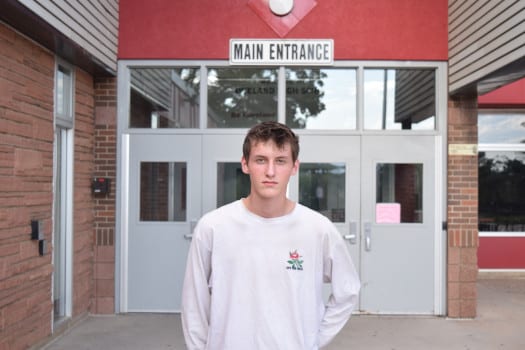 Loveland High School in Colorado suspended Nathan Myers this week and ordered a “threat assessment hearing” after he posted content to social media of himself and his mother having some target practice.

Myers has since been allowed to return to class, but Rally for Our Rights reported earlier this week:

A report had come into the police department about the video and they were told Nate was a threat. After showing the videos to the police officers and explaining that they’d simply gone on a mother-son outing to train with their legally owned firearms, the police stated that they had done nothing illegal and were well within their rights. They also determined Nate was not a threat to himself or anyone else and went on their way.

But it wasn’t over.

This morning Justine woke up to a voicemail from Thompson Valley School District where Nate is a junior at Loveland High School in Loveland, CO. The voicemail informed Justine that a report had come in claiming Nate was a threat to the school and he was not allowed to return until further notice. The report presumably came through Safe 2 Tell. There are reports that a school wide email was also sent to parents about the “threat”. Justine immediately contacted the school assuming she could easily clear things up, especially since the police had already assessed the situation and realized no one had done anything wrong or made any threats. She was wrong. The school not only refused to provide her with more information about the “threat”, but they refused to provide Nate with schoolwork so he doesn’t get behind.

“Nate Myers is being punished by a government school for a right that is enshrined by the very documents that established our nation’s government,” Dudley Brown, President of Rocky Mountain Gun Owners, which offered to help the Myers with any legal representation they made need, told Gunpowder Magazine at the time.