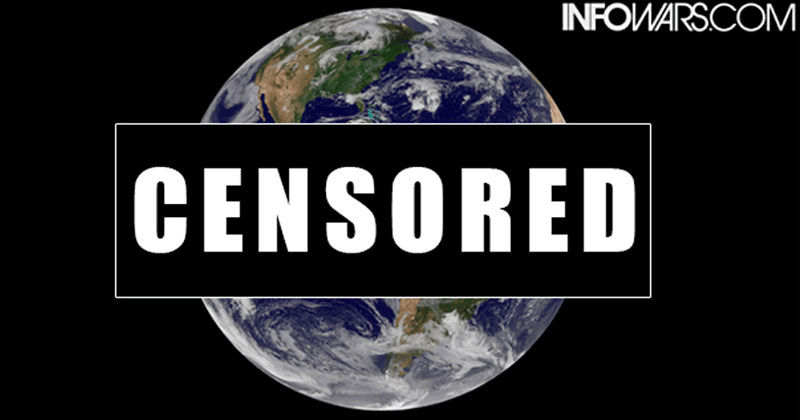 This was 1st published on Infowars via ZeroHedge:

In the wake of last week’s terror attacks at two New Zealand mosques which left 50 dead, several websites which either reported on the incident, hosted footage of the attacks, or have simply allowed people to engage in uncensored discussion such as Dissenter or Zero Hedge, have been partially or completely blocked in both New Zealand and Australia for the sake of “protecting consumers,” according to the CEOs of three New Zealand telcos.

In the immediate aftermath of the shooting – which was broadcast over Facebook Live by accused gunman Brenton Tarrant to an initial audience of just 200 viewers (none of whom reported it) and had 4,000 overall views before it was taken down – Facebook deleted 1.5 million videos of the attack, of which 1.2 million were blocked at the time of upload.

A video of the attacks is still freely available to anyone who wishes to download it from bittorrent.

Twitter has also been aggressively censoring content related to the Christchurch shooting – perhaps most egregiously forcing journalist Nick Monroe to delete a large number of tweets as he covered the incident in real time, just one of which had links to footage of the shooting. Document hosting website Scribd, meanwhile, has been deleting copies of Tarrant’s 74-page manifesto.

In addition to documenting the incident, Monroe has been noting the mass censorship surrounding the shootings – as well as things such as the New Zealand herald stealth editing a March 15 article to remove mention of a “well known Muslim local” who “chased the shooters and fired two shots at them as they sped off.”

That said, Twitter and Facebook’s suppression hasn’t gone far enough according to New Zealand telecom CEOs, who have penned an open letter to Facebook, Twitter and Google suggesting that they follow European proposals for hyper-vigilant policing of content for the sake of ‘protecting consumers.’

“Consumers have the right to be protected, whether using services funded by money or data. Now is the time for this conversation to be had and we call on all of you to join us at the table and be part of the solution,” reads the letter.

Less than a week after Facebook ‘mistakenly’ banned us for two days with no explanation following several reports which were critical of the social media giant, we learned that Zero Hedge has now been banned in New Zealand and Australia, despite the fact that we never hosted video footage of the Christchurch attack. We were not contacted prior to the censorship. Instead, we have received a steady flood of people noting that the site is unavailable in the two countries unless a VPN is used.

And while Australia and New Zealand account for a negligible amount of traffic to Zero Hedge, the stunning arrogance of NZ and OZ telcos to arbitrarily impose nanny-state restrictions on content is more than a little disturbing, and should – at least in a so-called democracy – be subject to majority vote.

Also banned down under are the ‘chans’ and video hosting platform LiveLeak, among others.

“You may be aware that on the afternoon of Friday 15 March, three of New Zealand’s largest broadband providers, Vodafone NZ, Spark and 2degrees, took the unprecedented step to jointly identify and suspend access to web sites that were hosting video footage taken by the gunman related to the horrific terrorism incident in Christchurch,” reads the joint letter from Vodafone’s Jason Paris, and NZ telcos Spark and 2degrees Simon Moutter Stewart Sherriff.

“As key industry players, we believed this extraordinary step was the right thing to do in such extreme and tragic circumstances. Other New Zealand broadband providers have also taken steps to restrict availability of this content, although they may be taking a different approach technically,” the letter continues.

We also accept it is impossible as internet service providers to prevent completely access to this material. But hopefully we have made it more difficult for this content to be viewed and shared – reducing the risk our customers may inadvertently be exposed to it and limiting the publicity the gunman was clearly seeking.”

“Internet service providers are the ambulance at the bottom of the cliff, with blunt tools involving the blocking of sites after the fact. The greatest challenge is how to prevent this sort of material being uploaded and shared on social media platforms and forums.

“We call on Facebook, Twitter and Google, whose platforms carry so much content, to be a part of an urgent discussion at an industry and New Zealand Government level on an enduring solution to this issue.”

So while the telcos have defended their decision to censor a wide swath of material in order to shield people from dangerous information – and have encouraged social media platforms to commit to European-style information control, Kiwis and Australians will only get to know what the technocracy approves in order to ‘protect consumers.’

Unless they set aside 15 seconds and use a VPN.

Editor’s Note: Again, tune into the 50-Hour Save The First Amendment – Stop Big Tech Censorship Broadcast starting Thursday at 8am Central at Infowars.com/Show. Please share this link to everyone you know to defend your own voice from being silenced forever!

Big Tech has proven they care more about virtue signaling to the left than standing up for free speech as world wide laws are being pushed to censor the population.