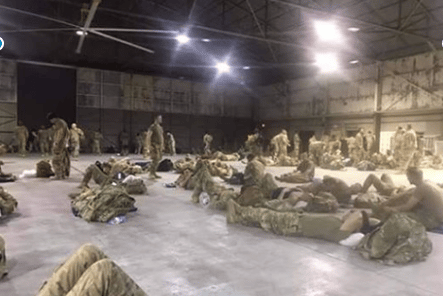 BREAKING: Our Military Was Forced To Wait Outside San Antonio Airport, In Hangar

Is this WTF day? I must have missed it on the calendar.

Is ANTIFA waiting to beat them up? or Would Our Troops offend any Muslims if Seen in the airport?

Did San Antonio airport SECEDE from the Union??? These guy’s n’ gals should be meet with a Band and Ticker Tape parade and a Keg of Beer. Or bare minimum nice dinner tables, with white linen and sparkling settings. Served Anything they want and plush couches and big screens to play any movie you want while they wait.

I’m not sure of the details but a close friend just posted it so I spotted it for a Share and had the above to say about it. Which is why I said what I said.

I grew up in a military family. Lived over seas on military bases as a kid when the base went to Defcon 2 Alert. During the Cuban missile crises. Defcon 2 is full alert battle stations, anticipate Nuclear Attack. All gates locked. No unnecessary vehicle traffic. No one comes on or leaves the base. Highest Security. All the ships to sea. I’ts like a ghost town.

Yes, our troops have been misused all over the world. But that’s behind us and those who serve need to be Honored and treated with respect. Not relegated to a drafty hanger with no furniture. That’s a insult to Those who Risk Their Live so We can live in the Safest most prosperous Zone on the Planet.

Most Americans who have never been out of the country or Served, or had a parent who served, or has never lived in a foreign country on a military base. Takes all this SAFETY for granted. Big mauls, big well stocked grocery stores…LooK around you. They have no clue. — But they will whine and complain… dilettantes !!

I Stand with our Troops. They have been misused in the past. Pawns, in an evil game to subvert the entire world to the will of the No World Order (NWO) of Endless wars by BankXters and corporate consortiums’ of war profiteering.