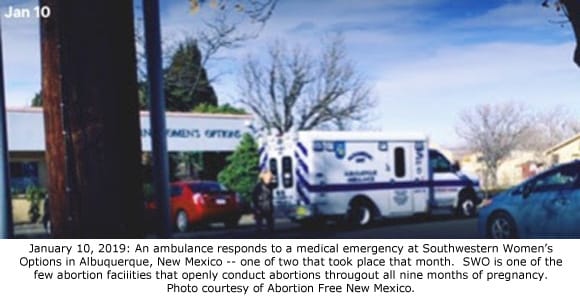 Albuquerque, NM – As the subject of third trimester abortions is being debated nationwide, two ambulances were summoned last month to Southwestern Women’s Options in Albuquerque, New Mexico, the largest late-term abortion clinic in the country, to care for women suffering serious abortion complications.

“We are grateful to President Donald J. Trump for advocating an end to the barbaric practice of late-term abortions and for his eloquent support of life in his brilliant State of the Union Address,” said Troy Newman, President of Operation Rescue. “Late-term abortions are fraught with risks, and the hospitalization of the two women in Albuquerque only highlights the dangers to women.”

The ambulances were seen at Southwestern Women’s Options on January 10 and January 31, 2019.