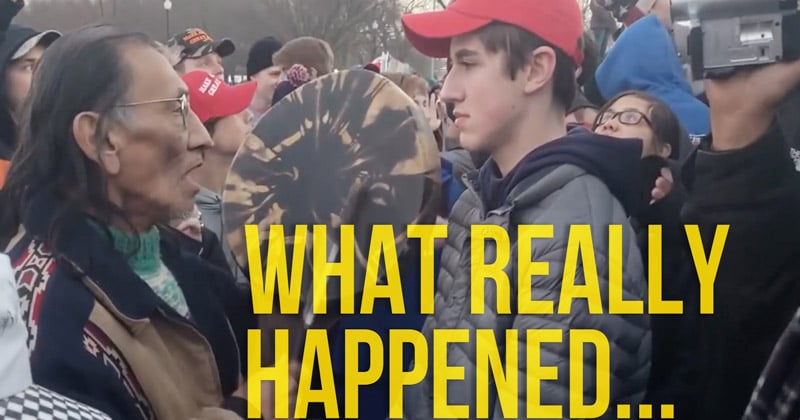 Nathan Phillips Lied! He Is An Actor And The Media Was In On It

A Native American activist who falsely claimed “harassment” by a group of pro-Trump Catholic school students has a history of feigning outrage to stoke racial tensions.

Several video feeds surfaced over the weekend showing activist Nathan Phillips banging a drum in front of a group of students outside the Lincoln Memorial for the pro-life march, which the mainstream media then claimed was an act of racism by the students.

As liberal figures and publications backtrack their accusations in light of additional video showing the full picture, more information is coming to light about Phillips and his history of “drumming up” racial division.

In 2015, Phillips accused a group of Eastern Michigan University students of racism after confronting them for wearing Native American garb for a theme party.

Additionally, the media is reporting that Phillips served as a Vietnam veteran, but the validity of those reports remain in question given Phillip’s claim that he was a “Recon Ranger” is a nonexistent operational force.

Phillips also made his politics known in 2012 when he appeared in a Skrillex music video called “Make It Bun Dem,” which demonizes law enforcement.

EA Media finds it sad that the left is so deranged by the best President in U.S. History … that they have to ruin children’s lives like these young boys who now have to deal with threats on their life!

The Covington Catholic High School students have maintained that they were doing school chants to drown out the hateful bullying they were getting from adult protesters. A shocking new video confirms their account fully.

When asked by Gateway Pundit if she wanted to comment on the video, one of the mother’s of a 14-year-old child who was present said that she was “too busy crying.”

Speaking to the Gateway Pundit on Sunday, one of the students explained what happened:

“We went to the Lincoln Memorial because that is where our bus was going,” the student explained. “We were standing there when a group of four African-American protesters started calling us ‘crackers’ and ‘school shooters.’”

“So, we started doing school cheers, because our school is very big on school spirit. We have a lot of chants and cheers that we do, so we started doing them. Eventually, while we were doing that, the Native American man approached us and was banging his drum. He walked directly into the crowd and approached the one student that is all over the place right now. The boy just stood there. When I first saw it happening I was really confused. I didn’t know what was happening. I just saw this man approach a fellow student and start banging a drum in his face.”