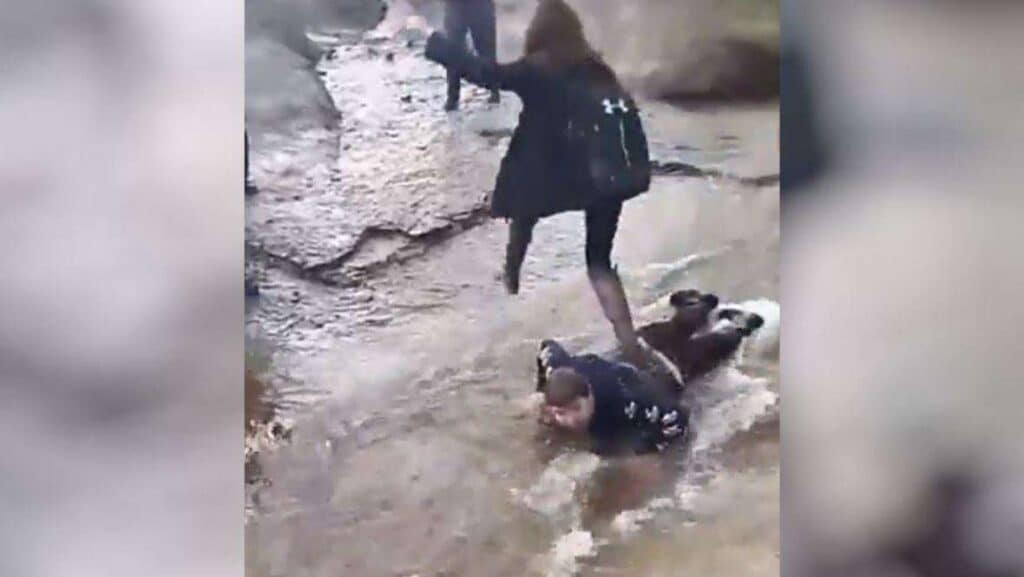 Canadian police are investigating after a boy with cerebral palsy was forced to lie down in a stream so students could walk over him.

A Facebook video viewed 300,000 times shows 14-year-old Brett Corbett acting as a human bridge across the waterway outside Nova Scotia’s Glace Bay High School as a female student steps on his back without getting wet.

“It started as a dare. But then someone threatened to push me,” Brett tells the CBC.

“He was told if he didn’t get in, he would be thrown in … so he felt he had no choice,” adds mom Terri McEachern. She tells the Washington Post a total of three students walked on her son during the Nov. 7 incident, leaving her heartbroken. She wasn’t the only one. “Parents; you failed this generation,” a family friend captioned the video he uploaded.

Per the Post, other footage shows students yelling profanities at Brett, whom they direct back in the water when he stands. A student tells the Cape Breton Post that those involved were suspended for a day, though a rep for the Cape Breton Victoria Regional School Board wouldn’t confirm that, noting school and police investigations are ongoing.

Some students have also apologized. “This has turned out to be the worst decision of my life,” a boy said in a statement read at a public meeting Saturday, per CTV News.

“I should have helped you up instead of breaking you down,” added one of two girls who apologized to Brett in person, bringing him to tears.

“He said he was glad it happened to him, because maybe his story can make a difference,” McEachern tells the Washington Post. (An empathy expert is also accused of bullying.)