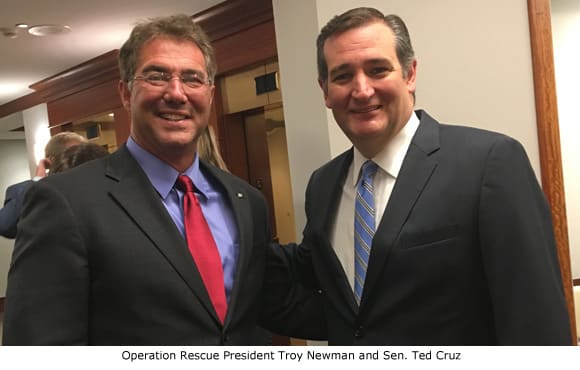 Washington, DC — In the wake of the confirmation battle over Justice Brett Kavanaugh, it is more apparent than ever that we need solid, pro-life Republicans in the Senate to bolster our meager majority. Republicans must gain seats in this Mid-Term Election and cannot afford to lose any to the radical pro-abortion Democrats, especially when it comes to the seat occupied by pro-life stalwart Sen. Ted Cruz of Texas.

Sen. Cruz is considered a long-time pro-life hero. He distinguished himself during the recent contentious Kavanaugh confirmation hearings where he stood in eloquent support of President Trump’s embattled Supreme Court nominee.

“Ted Cruz is a man that will continue to speak out and work in defense of the innocent, whether it be a baby in the womb or a man falsely accused,” said Troy Newman, President of Operation Rescue, who also served as a founding board member for the Center for Medical Progress. “He is a man of integrity who is badly needed in the Senate, especially during these perilous times when the future direction of our nation hangs in the balance. I wholeheartedly endorse Ted Cruz for Senate.”

Newman served as co-chair of “Pro-Lifers for Cruz” during Cruz’s 2016 presidential bid.

“Sen. Cruz’s opponent is a radical leftist pro-abortion Democrat that will take America in the wrong direction,” said Newman. “Sen. Cruz has been a strong supporter of President Donald J. Trump’s popular agenda to ‘Make America Great Again.’ The last thing we need is a pro-socialist resister who will block Trump’s agenda that is strengthening our economy, putting people back to work, and undoing the ‘Culture of Death’ embedded in our government during the eight long years of the pro-abortion administration of Barack Obama.”

Operation Rescue urges pro-life conservatives in Texas to be sure and get out to the polls on Election Day, November 6. Every single vote is urgently needed.

“We cannot over-emphasize how important each person’s vote truly is. The left is angry and energized by their defeat in the Kavanaugh confirmation battle,” said Newman. “We must exceed their enthusiasm during the mid-term elections in order to save our Republic and save innocent lives from abortion. Please get out and vote for Sen. Ted Cruz. Our very future and the future of our nation depends on it!”

Learn how you can support Sen. Ted Cruz.