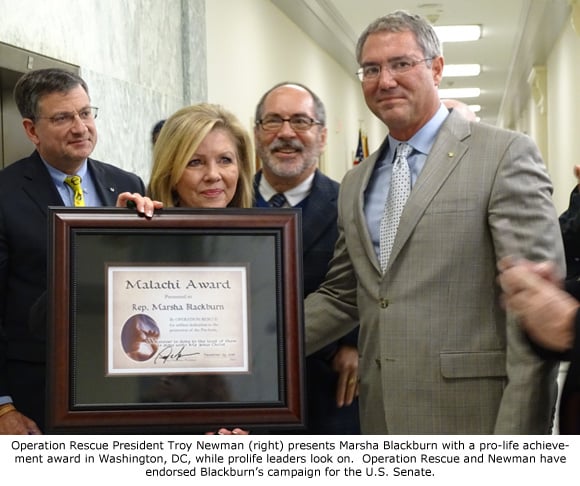 Washington, DC – Rep. Marsha Blackburn of Tennessee has always distinguished herself as a pro-life warrior. She chaired the House Select Panel on Infant Lives in 2015 and personally signed the letters to the U.S. Department of Justice referring Planned Parenthood and others for criminal investigation and prosecution based on evidence of the illegal trafficking in aborted baby body parts and intentionally killing babies born alive during late-term abortions.

In 2016, Operation Rescue named Rep. Blackburn as the recipient of the Pro-Life Person of the Year Malachi Award, which is given each year by Operation Rescue to recognize individuals who sacrificially work to advance the cause of protecting the pre-born.

Now, Blackburn is locked in a tough election battle in her bid for the U.S. Senate where the Republicans currently hold the slimmest majority. Her opponent is typical of today’s radicalized Democratic Party that demands abortion at all costs.

“I have the utmost respect for Marsha Blackburn and for her dedication to the protection of women and babies from exploitation and death from abortion. I also know she is behind President Donald J. Trump’s agenda to ‘Make America Great Again,’ and will work to enact legislation that will save and protect our great Republic,” said Troy Newman, President of Operation Rescue who also served as a founding board member for the Center for Medical Progress. “I wholeheartedly endorse Marsha Blackburn for the U.S. Senate.”

Operation Rescue urges Tennesseans to get to the polls and vote for Marsha Blackburn on November 6. No one can afford to stay home because every single vote is needed to ensure victory.

“We must increase the GOP majority in the Senate and cannot afford to lose even one seat to the Democrats, who would work to undo all the advances made so far during the Trump administration. Marsha Blackburn will be a great ally to President Trump and the Pro-Life Movement. She will press forward on issues that will continue to bolster our economy, put Americans back to work, and encode legislation that respects and protects life from the moment of conception,” said Newman.

Learn how you can support Marsha Blackburn for Senate.