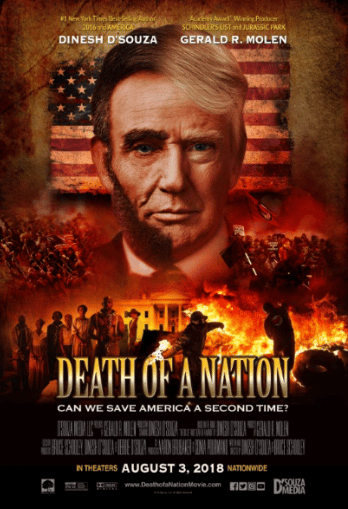 “Death Of A Nation” Film Opening In Theaters August 3rd, 2018

Not since 1860 have the Democrats so fanatically refused to accept the result of
a free election. That year, their target was Lincoln. They smeared him.
They went to war to defeat him. In the end, they assassinated him.
Now the target of the Democrats is President Trump and his supporters. The
Left calls them racists, white supremacists and fascists. These charges are used
to justify driving Trump from office and discrediting
the right “by any means necessary.”
But which is the party of the slave plantation? Which is the party that invented
white supremacy? Which is the party that praised fascist dictators and
shaped their genocidal policies and was in turn praised by them?
Moreover, which is the party of racism today? Is fascism now
institutionally embodied on the right or on the left?
Through stunning historical recreations and a searching examination of fascism
and white supremacy, Death of a Nation cuts through progressive
big lies to expose hidden history and explosive truths.
Lincoln united his party and saved America from the Democrats for the first
time. Can Trump—and we—come together and
save America for the second time?

Dinesh D’Souza is a best-selling author and filmmaker. His films 2016: Obama’s America and America: Imagine The World Without Her are the #2 and #6 highest-grossing political documentaries of all time, respectively. D’Souza’s latest feature-length film, Hillary’s America, is widely credited with contributing to Hillary Clinton’s defeat in 2016, and quickly joined his first two films in the top 10 political documentaries of all time.

Born in Mumbai, India, Dinesh has truly lived the American Dream. He moved to the United States to attend school on a Rotary Scholarship, and, following graduation from Dartmouth College, he went on to work in the Reagan White House as a policy analyst.

D’Souza has served as a John M. Olin Fellow at the American Enterprise Institute and Robert and Karen Rishwain Fellow at Stanford University. D’Souza has won numerous awards including “Best Documentary” for America: Imagine The World Without Her (The Dove Foundation), and he has been called one of the “top young public-policy makers in the country” by Investor’s Business Daily.

"INFIDEL" Produced By D'Souza Media In Theaters September 18 | Eternal Affairs Media | the truth powered by The Truth | What Will You Believe?

[…] know Dinesh D’Souza as the creator of political documentaries, and his new documentary Trump Card will be released on […]