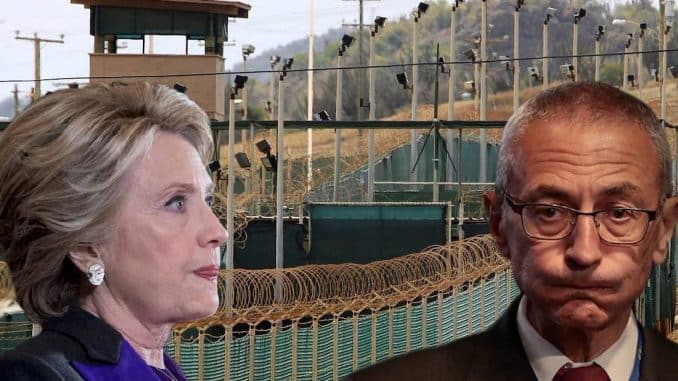 President Trump has ordered Guantanamo Bay to prepare for incoming ‘high level’ prisoners, including American politicians, within the next few months.

According to a Military of Defense report, Trump is preparing to transfer an unknown number of ‘VIP’ American detainees to the notorious prison in preparation for their trials before a US Military Tribunal.

Reports suggest that people connected to the Uranium One scandal are being placed in custody in preparation for the trials.

Hundreds of US Army Military Police have also been deployed to Cuba to help oversee the process.

According to the DoD report, while conducting routine training missions in Cuba, intercepted an unusually large number of encrypted communications emanating between the Guantanamo Bay Naval Base (Cuba) and Luke Air Force Base (Arizona)—immediately after which they made a request to SVR counterintelligence analysts for an explanation of—with the SVR, in turn, then reporting to SCT that these communications were being conducted between the Guantanamo Military Commission (that holds US Military Tribunals) and US Attorney Generals Jeff Sessions.

On 21 December 2017, this report further notes, SCT reported that nearly all of these communications between Guantanamo Bay Naval Base and Luke Air Force Base had ceased—with the SVR reporting that this cessation occurred when US Defense Secretary James “Mad Dog” Mattis made an unprecedented-unannounced visit to Guantanamo—the first visit there by a US Defence Secretary in nearly 16 years—and that in doing, Secretary Mattis shockingly broke with the longstanding tradition of persons holding his high office visiting American troops on the front lines