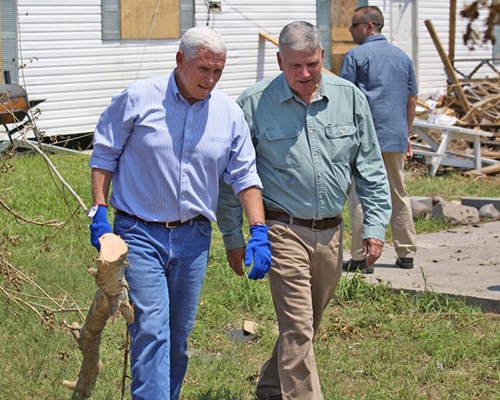 Thank you for your support and prayers over the past week as Billy Graham Rapid Response Team chaplains have been ministering at evacuation centers and homes throughout southeast Texas.

The chaplains were joined by Vice President Mike Pence and second lady Karen Pence on Thursday in Rockport. They met with Franklin Graham, prayed for the people of Texas and lent a helping hand after one of the worst natural disasters in U.S. history.

We thank you again for the prayers and support you have already given as chaplains have shared the love and compassion of Christ in Texas.

All American Hearts Are with the People of Texas and Louisiana, The President addresses the nation!

“All American hearts are with the people of Texas and Louisiana. We mourn and pray and struggle through the hardships — together. We know that a long and difficult path lies ahead to get our neighbors back in their homes and on their feet. But we also know that we are stronger than the obstacles in our path. Arm-in-arm, we will strive, we will endure, and we will emerge stronger than ever before.”
-President Donald J. Trump

“On behalf of the American people, with the leadership of President Donald Trump to the people of Texas, we are with you today. We will be with you tomorrow, and we will be with you every day until this great state and these great communities recover and rebuild to be even better and stronger than ever before.”
-Vice President Pence