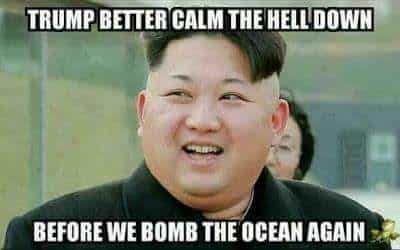 North Korea fired three short-range missiles, but two of them “failed in flight” while the third blew up shortly after launching, the U.S. military said Friday.

Seoul’s Joint Chiefs of Staff said that the projectiles fired from the North’s eastern coast flew about 155 miles, though it did not mention any failures. It said South Korea and U.S. militaries were analyzing the launch and didn’t immediately provide more details.

The U.S. military’s Pacific Command said it had detected three short-range ballistic missiles, fired over a 20 minute period. All of the missiles failed, with one blowing up almost immediately after launch, while two others failed in flight, it added.

The South Korean Office of the Joint Chiefs of Staff said the projectiles were launched from the North’s eastern Kangwon province and flew in a northeasterly direction about 250 km (155 miles) into the sea.

Trump better watch out or Kim Jong will fire another projectile into the ocean! LOL!