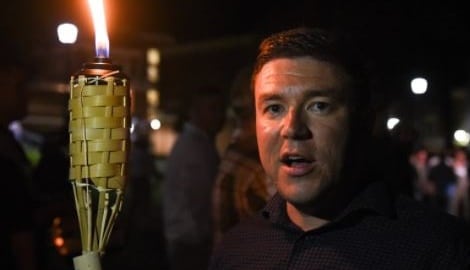 Well this is fishy. His name is Jason Kessler. He is the one cited as the organizer of the now infamous “Unite the Right” rally in Charlottesville, Virginia. The thing is, Mr. Kessler’s arrival on the “alt right” and/or “White Nationalist” scene didn’t occur until November 2016.

That’s right – Kessler didn’t start his white nationalist activism until after Donald Trump won the White House. Prior to that it appears he participated in the far left/socialist Occupy Wall Street movement as noted by the far-left, George Soros-funded Southern Poverty Law Center

Rumors abound on white nationalist forums that Kessler’s ideological pedigree before 2016 was less than pure and seem to point to involvement in the Occupy movement and past support for President Obama.

At one recent speech in favor of Charlottesville’s status as a sanctuary city, Kessler live-streamed himself as an attendee questioned him and apologized for an undisclosed spat during Kessler’s apparent involvement with Occupy. Kessler appeared visibly perturbed by the woman’s presence and reminders of their past association.

It also appears Mr. Kessler was actually a CNN on site correspondent during the Occupy protests: (these are being archived as it appears CNN is attempting to scrub its former affiliation with Mr. Kessler:)