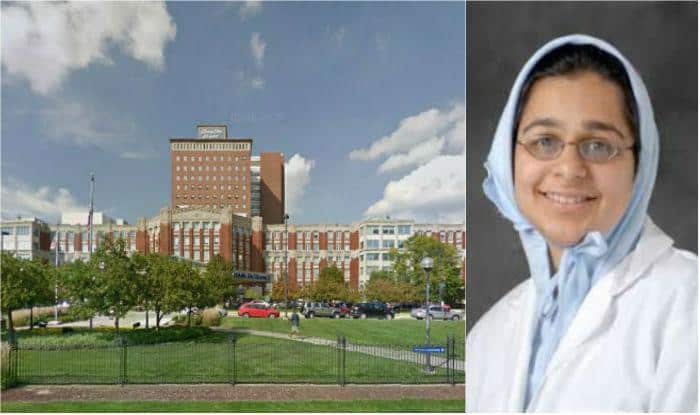 God has created the living beings of the world in pairs of male and female and the beauty of the mechanism is kept in their mental and physical compatibility. But there have been many times that this has been portrayed in negative ways.

Women have been facing the term called “sexual brutality” ever since we have known the world started. And the sad part of which is that there has not only been men but to many drastic incidents being reported have involved woman to another woman.

How much is it difficult to realize the matter of faith we are created by the God himself and there could be no further changes a human brain could think of, about its physical appearance, could be better.

GOD CREATED MAN AND THEN SAID, ‘I CAN DO BETTER THAN THAT’ AND CREATED WOMAN.”

After all the debate, the most unbelievable human act possible is female genital mutilation, which is till being practiced in most parts of the world we hear, even today, in the name of different faiths, rituals and medical obligations.

According to the Wikipedia:

Female genital mutilation (FGM) or (FGC) is practiced in 30 countries in western, eastern, and north-eastern Africa, in parts of the Middle East and Asia, and within some immigrant communities in Europe, North America and Australia.  The WHO defines the practice as “all procedures that involve partial or total removal of the external female genitalia, or other injury to the female genital organs for non-medical reasons.”

According to a 2013 UNICEF report covering 29 countries in Africa and the Middle East, Egypt has the region’s highest total number of women that have undergone FGM (27.2 million), while Somalia has the highest percentage (prevalence) of FGM (98%).[3]

The world’s first known campaign against FGM took place in Egypt already in the 1920s,[3] but FGM prevalence in Egypt in 1995 was still at least as high as Somalia’s 2013 world record (98%), despite dropping significantly since then among young women.[12] Estimates of the prevalence of FGM vary according to source.

Although estimates of the prevalence of FGM vary, sources have consistently found the practice to be undergone by the majority of women in the Horn of Africa, in the West African countries of Guinea, Sierra Leone, Gambia, Mauritania, Mali and Burkina Faso, as well as in Sudan and Egypt. Of these countries, all have laws or decrees against the practice, with the exception of Sierra Leone, Mali and some states of Sudan.

Infibulation, the most extreme form of FGM, known also as Type III, is practiced primarily in countries located in northeastern Africa.

The only indigenous tribe in Latin America known to practise FGM is Colombia’s Emberá people. 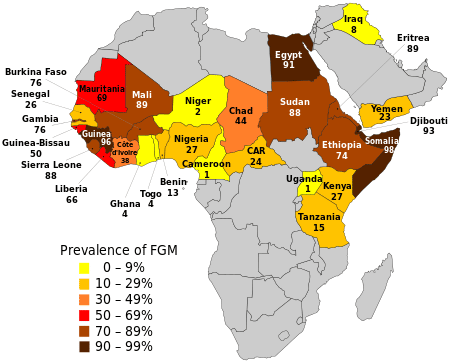 ACCORDING TO WHO (WORLD HEALTH ORGANISATION):

Female genital mutilation (FGM) comprises all procedures that involve partial or total removal of the external female genitalia, or other injury to the female genital organs for non-medical reasons.

The practice is mostly carried out by traditional circumcisers, who often play other central roles in communities, such as attending childbirths. In many settings, health care providers perform FGM due to the erroneous belief that the procedure is safer when medicalized1. WHO strongly urges health professionals not to perform such procedures.

FGM is recognized internationally as a violation of the human rights of girls and women. It reflects deep-rooted inequality between the sexes, and constitutes an extreme form of discrimination against women. It is nearly always carried out on minors and is a violation of the rights of children. The practice also violates a person’s rights to health, security and physical integrity, the right to be free from torture and cruel, inhuman or degrading treatment, and the right to life when the procedure results in death.

No health benefits, only harm

FGM has no health benefits, and it harms girls and women in many ways. It involves removing and damaging healthy and normal female genital tissue, and interferes with the natural functions of girls’ and women’s bodies. Generally speaking, risks increase with increasing severity of the procedure.

Immediate complications can include:

Long-term consequences can include:

Who is at risk?

Procedures are mostly carried out on young girls sometime between infancy and adolescence, and occasionally on adult women. More than 3 million girls are estimated to be at risk for FGM annually.

More than 200 million girls and women alive today have been cut in 30 countries in Africa, the Middle East and Asia where FGM is concentrated 1.

The practice is most common in the western, eastern, and north-eastern regions of Africa, in some countries the Middle East and Asia, as well as among migrants from these areas. FGM is therefore a global concern.

An emergency-room doctor in the U.S. Midwest has been arrested and charged with performing female genital mutilation on girls between the ages of 6 and 8, in the first criminal case brought under a 1996 law that outlawed the practice.

Jumana Nagarwala, a 44-year-old doctor at a hospital in Detroit, Michigan, is accused of performing genital mutilation on young girls as far back as 2005, according to a criminal complaint released Thursday. The U.S. Department of Justice said she “performed horrifying acts of brutality on the most vulnerable victims.”

Nagarwala had an initial court appearance before a U.S. magistrate Thursday in Detroit and was ordered detained until Monday, pending a further hearing on the felony charges she is facing, which specifically involve two 7-year-old girls she operated on in February.

Senior officials called the charges “disturbing” and “deplorable,” and said U.S. law-enforcement agencies “are committed to doing whatever is necessary to bring an end to this barbaric practice, and to ensure no additional children fall victim to this procedure.”

A preliminary criminal complaint released by the U.S. Department of Justice said Nagarwala told federal agents she knew that performing female genital mutilation is a crime in the United States and denied that she conducted the procedure on anyone.

Nagarwala, who received her medical degree from Johns Hopkins University in Maryland, has been licensed as a physician in Michigan since 2001; state records show no formal complaints or disciplinary action against her. Her lawyer, Shannon Smith, did not immediately respond to a request for comment on the case.

If convicted, Nagarwala faces a fine and up to five years in prison for performing female genital mutilation, also known as FGM. She would be the first person prosecuted under the 1996 law prohibiting FGM.

The latest follow-up on the case reported:

In the most recent case outlined in the complaint, the FBI, using court-ordered telephone records and video surveillance, tracked two Minnesota mothers and their 7-year-old daughters as they visited Nagarwala at a medical office near Detroit, and where the physician allegedly performed FGM procedures on the girls two months ago.

One of the children told an investigator this week that they were in Michigan to see a doctor because “our tummies hurt,” and were examined by Nagarwala. The doctor reportedly told the girl she was going to perform a procedure to “get the germs out” of her body.

Doctors who examined the girls this week confirmed that their genital areas were “abnormal” and bore signs of mutilation.

The girls were interviewed by an FBI child forensic expert and identified Nagarwala as the doctor who operated on them. The parents of one of the victims later admitted to the FBI that they had taken their daughter to Nagarwala for a “cleansing” of extra skin.

The hospital that employed Nagarwala apparently was not involved in the case, and the physician was not listed as having any links to the office in Livonia, outside Detroit, where she examined the girls.

Agents of the FBI and the Department of Homeland Security, who worked together on the case, said they have identified multiple other incidents where young girls have been victims of FGM allegedly performed by Nagarwala between 2005 and 2007, according to the criminal complaint.

“Female genital mutilation constitutes a particularly brutal form of violence against women and girls,” acting U.S. Attorney Daniel Lemisch of the Eastern District of Michigan said in a statement. “The practice has no place in modern society and those who perform FGM on minors will be held accountable under federal law.”

SHARE AND LEAVE US YOUR COMMENTS BY SCROLLING DOWN BELOW!