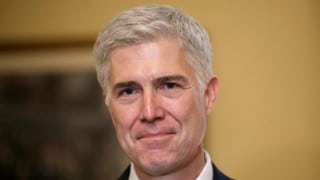 Judge Neil Gorsuch Swears The Constitutional Oath ON THIS OWN FAMILY BIBLE!

RECAP!
WASHINGTON — History was made Thursday in the United States Senate: Democrats mounted a partisan filibuster of Supreme Court nominee Neil Gorsuch. Republicans blew up the Senate’s rules to clear the way for his confirmation. But that history came with a history of its own, replete with temporary victories for each party and plenty of blame to go around. It’s a brawl that’s been decades in the making. And it’s put the court where it least wants to be — squarely in the middle of American politics.
Democratic Senators voiced their opposition to President Trump’s Supreme Court nominee, Judge Neil Gorsuch late Wednesday night. They also expressed anger that former President Obama’s nominee, Judge Merrick Garland, never got a hearing. ~ USAToday.org

The Human Coalition sent out this email Thursday morning …

This is a historic week for our nation, as all eyes turn to the U.S. Senate and the late Justice Antonin Scalia’s Supreme Court vacancy, which will soon be filled. Neil Gorsuch is eminently qualified to fulfill the duties of Supreme Court Justice, and I believe his constitutional values and approach align with our deeply held pro-life beliefs and worldview.

Over the last few weeks, tens of thousands of Human Coalition supporters signed a petition urging the Senate to do their jobs and confirm Judge Gorsuch. Yesterday, Human Coalition’s National Outreach Director, Rev. Dean Nelson, visited the offices of key senators on Capitol Hill to hand-deliver the petitions. Rev. Nelson spoke with officials in their offices to reiterate that the pro-life American majority wants Judge Neil Gorsuch confirmed to the Supreme Court of the United States.

Click here to read more and see some photos on our blog.

Senate Republicans on Thursday engineered a dramatic change in how the chamber confirms Supreme Court nominations, bypassing a Democratic blockade of Judge Neil M. Gorsuch in a move that will most likely reshape both the Senate and the high court.

After Democrats held together Thursday morning and filibustered President Trump’s nominee, Republicans voted to lower the threshold for advancing Supreme Court nominations from 60 votes to a simple majority.

In deploying this so-called nuclear option, lawmakers are fundamentally altering the way the Senate handles one of its most significant duties, further limiting the minority’s power in a chamber that was designed to be a slower and more deliberative body than the House.

Judge Neil Gorsuch Swears The Constitutional Oath ON THIS OWN FAMILY BIBLE!