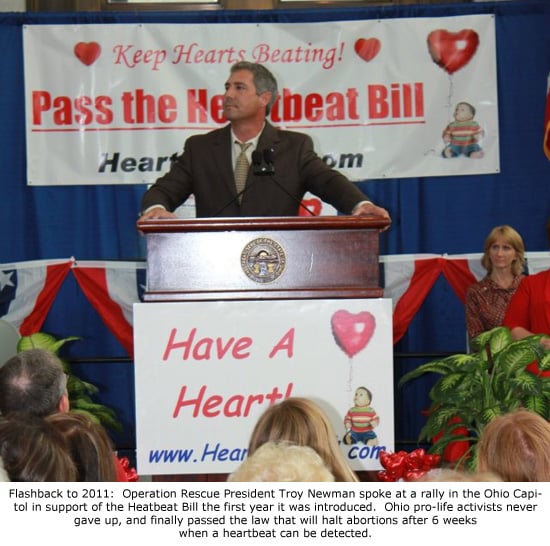 Columbus, OH – For five years and against stiff opposition – sometimes from within the pro-life camp – Janet Folger Porter has worked with the Ohio Legislature to pass a unique bill that would prevent abortion when the heartbeat of a pre-born baby can be detected, generally at six weeks gestation. That bill would essentially end all but a very few early abortions in Ohio.

Yesterday, for the first time, the Ohio Senate passed the Unborn Heartbeat Protection law, which was previously approved by the House as it has been several times before.

Now the groundbreaking law goes to the desk of Republican Gov. John Kasich for his signature.

“We urge Gov. Kasich to sign the Heartbeat Bill as soon as possible,” said Troy Newman, President of Operation Rescue. “It is what the Ohio Legislature wants and it is want the people want, must most importantly, it will save countless lives from a barbarically brutal death by abortion. Not signing this live-saving legislation is simply unthinkable.”

But Kasich’s signature may not be a sure thing. In the past, he as indicated that he thought the Heartbeat Bill, as it is known, was too risky a gambit that could not pass constitutional muster.
Continue reading!