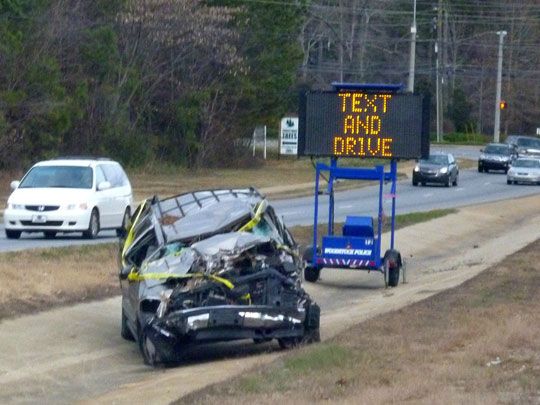 How Do You Spot Disinformation Agents?

Police Departments Partnering With Amazon to Spy on Citizens

Detroit Mother Sentenced to Jail for Not Vaccinating Her Son

Pastor: You Shouldn’t Be Afraid of Witchcraft, Demons if You’re a Christian

Wisconsin High School used Scare Tactics to warn students about safe driving.  This method was agreed by the school and student council by announcing that 4 of their students died by a car accident. They tend to use this method to educate the students about the danger of using phone while driving.

Wisconsin High School organizes a drill for their students to teach them about the dangers of distracted driving. Then afterwards, the school announces that their 4 classmates had died in car crashes involving texting while driving, and in detailed on how the students rushed to hospitals.

A lot of students cried and text their parents of what had happened.

During the school’s official morning announcements that day, two classmates delivered this:

“These are your morning announcements. Currently today it is the 26th. There have been a series of wrecks and multiple reckless driving things happening currently around Brodhead. We’ve currently lost a handful of fellow students, and we’re going to show you some images of their lives now. We’d like you to give them a moment of silence” and photos of several Brodhead students flashed on the screen against a haunting piano and violin tune.

“Today make sure you take a moment and think about all your loved ones as those were pretty sad moments there,” the student broadcasters said in their sign-off. “As well as drive safe … have a good day.”

Afterwards the person who made the announcement said that the previous announcement was actually false and part of the drill about safe-driving techniques to warn students about the real effects of being distracted while driving. And the students who participated in the drill were told not to use their phones to reply to classmates.

Sam Bolen, student of Wisconsin who attends Brodhead said “It wasn’t really effective. They were trying to teach using scare tactics, which doesn’t teach. It just makes you not trust the teachers and any of announcements you’re going to get. On other hand Sam mother did not approve of the way the school staff members and administrators handled the exercise and said that “It’s almost insulting, in a way,” which she called a scare tactic. “I don’t feel that you need to go to those kinds of extremes to teach a lesson. It minimizes other people’s feelings who have actually gone through it.”

Some said that the drill was effective because it involves the emotion of the teens. In order for them to take the message seriously they should really feel what will happen and what will be the result if they won’t take warning and caution seriously. If the students were upset because it happened,  how much more if it’s true?

Nearly 60 percent of crashes involving teen drivers have some form of distraction in the six seconds leading up to the accident, according to a report by the AAA Foundation for Traffic Safety. Teen drivers get into car crashes or near- crashes when talking or texting on a cellphone 4 times more likely than adults. And according to AAA poll, 94% of teen drivers acknowledge the dangers of texting and driving, but 35% admitted to doing it anyway.

At the end of the day, Bolen said, there was an assembly where the school’s principal called out students who were upset.

Brodhead School District Superintendent Leonard Lueck told the Post in an email that the drill was intended to bring awareness to teen driving safety but acknowledged “problems with this activity due to communication issues that occurred. We will evaluate the value of this activity and either make changes to how it is communicated or not do the activity again.”

Lueck added that the district formally apologized to parents and students “for any undue stress this activity may have caused.”

What do YOU think? Was this intended to be a false flag on a larger scale, gone awry?

Wouldn’t you love it of OANN could be a legit competitor against Fox News?

Our Friends At Infowars: