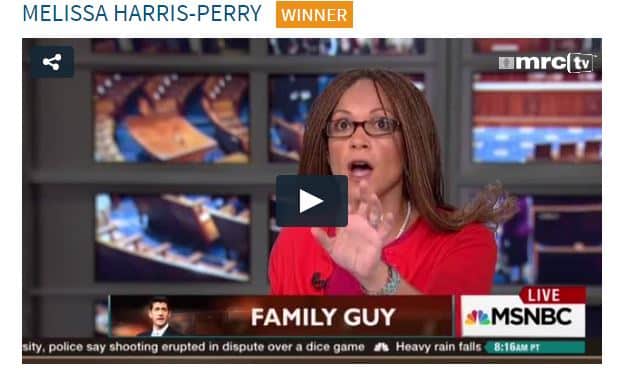 Last night the Media Research Center held its 2016 Gala featuring the DisHonors Awards, skewering the most biased liberal reporting, and it was a great time!

The Master of Ceremonies was Cal Thomas, and he was joined by a whole host of special guests including Deneen Borelli, Chris Plante, Lt. Gen. Jerry Boykin, and music star Charlie Daniels, who received the MRC’s William F. Buckley, Jr. Award for Media Excellence.

This year’s audience overwhelmingly selected MSNBC’s Melissa Harris-Perry as the recipient for the Quote of the Year.

Alfonso Aguilar, Latino Partnership for Conservative Principles: “If there’s somebody who is a hard worker when he goes to Washington, it’s Paul Ryan….”

Host Melissa Harris-Perry: “I want us to be super careful when we use the language ‘hard worker,’ because I actually keep an image of folks working in cotton fields on my office wall, because it is a reminder about what hard work looks like. So, I feel you that he’s a hard worker, I do, but in the context of relative privilege.”

I have a message for you Melissa Harris-Perry: My grandmother worked hard in cotton fields all her life as a child and she is white. Have you ever worked in a cotton field? probably not. I think you are the one trying to get privilege.