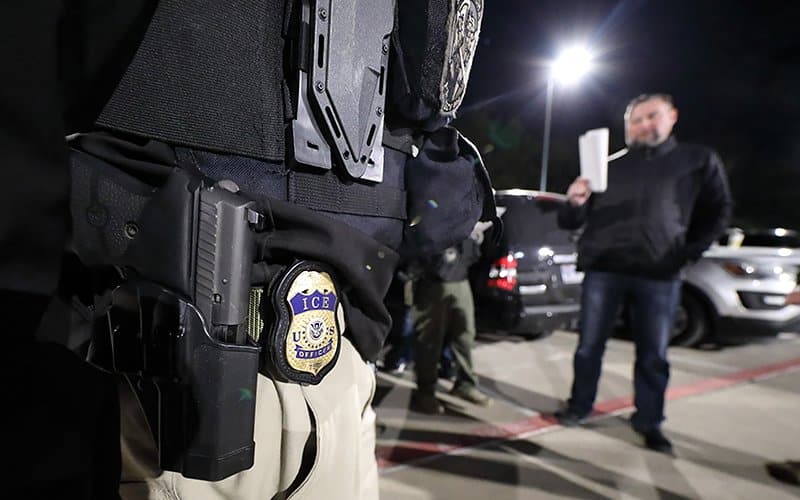 The Friday, Saturday and Sunday operation resulted in the arrests of nine people. Five face prosecution for state charges and four have been referred for federal charges. Suspects were booked into the Ada County Jail.
“This operation took nine dangerous child predators off the streets,” said Eben Roberts, acting special agent in charge of HSI Seattle. “This operation’s success, and those like it, is a direct result of the strong partnership between HSI and local, state and federal law enforcement. HSI is committed to protecting children from those seeking to take advantage of their innocence.”

“It’s an honor for the ICAC Unit to participate in this type of operation,” Wasden said. “To plan and coordinate such a project takes significant time and energy. But when you see the outcome and know Idaho children are now safer as a result, it’s very satisfying.”

Jesse A. Kelly-Castillo, 23, Boise, was arrested Friday. He faces a federal charge of coercion and enticement.

Trevor M. Byram, 25, of Boise, was arrested Friday. He faces a state charge of enticing a child through use of the internet or other communication device.

Maxwell G. Hennerley, 23, of Boise, was arrested Friday. He faces a federal charge of coercion and enticement.

Joshua Schmitz, 33, of Garden City, was arrested Saturday. He faces a state charge of enticing a child through use of the internet or other communication device.

Shawn M. Reber, 27, of Fruitland, was arrested Saturday. He faces a state charge of enticing a child through use of the internet or other communication device.

Seth M. Holden, 29, of Garden City, was arrested Saturday. He faces a state charge of enticing a child through use of the internet or other communication device.

Vern L. Moore, 55, of Kuna, was arrested Sunday. He faces a federal charge of coercion and enticement.

Patrick P. Telleria, 35, of Boise, was arrested Sunday. He faces a state charge of enticing a child through use of the internet or other communication device.

Jordan M. Drake, 32, of Boise, was arrested Sunday. He faces a federal charge of coercion and enticement.

“I continue to be proud of the efforts of Idaho’s local, state, and federal law enforcement agencies to protect children from child exploitation, including the efforts and results of this weekend’s joint operation,” U.S. Attorney for the District of Idaho Bart Davis said. “Project Safe Childhood (PSC) focuses on investigating and prosecuting online sexual offenses involving minors. These dedicated PSC partners illustrate the best in law enforcement, collaborating to combat the growing and shameful epidemic of child sexual exploitation and abuse.”

Idaho State Police provided facilities and numerous other resources for the project.

“The sad fact is Idaho’s children are at risk from online predators,” said Idaho State Police Director Col. Kedrick Wills. “The work done in operations like this one is extremely difficult, but it’s also essential for the safety of Idaho’s youngest and often most vulnerable citizens. At Idaho State Police, we’re committed to supporting these joint projects. More Idaho children are safe today because of what these operations are able to accomplish.”

“Holding offenders accountable for crimes against our children is a top priority for my office and for law enforcement,” Ada County Prosecutor Jan M. Bennetts said. “I want to thank our partners in law enforcement for collaborating in this effort. It demonstrates a commitment to protecting our children.”

“While technology has improved our lives immensely, unfortunately when used inappropriately it has also made it much easier for predators to prey on children,” Meridian Deputy Police Chief Tracy Basterrechea said. “Hopefully this operation helps send the message we will not tolerate these crimes in our community.”

Anyone with information regarding the exploitation of children is encouraged to contact local police, the Attorney General’s ICAC Unit at 208-947-8700, or the National Center for Missing and Exploited Children at 1-800-843-5678.

The Attorney General’s ICAC Unit works with the Idaho ICAC Task Force, a coalition of federal, state, and local law enforcement agencies, to investigate and prosecute individuals who use the internet to criminally exploit children. The ICAC Unit’s website, ICACIdaho.org, is a resource for parents and children to learn about ways young people can stay safe in the digital world.

HSI protects and rescues children from criminals who seek to harm or exploit them. For more information visit https://www.ice.gov/predator.