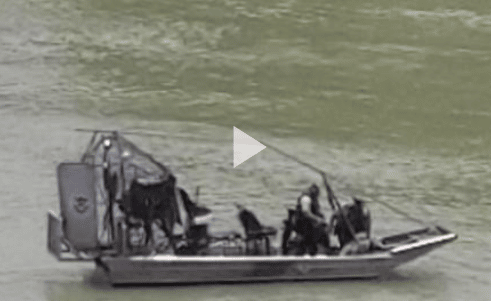 EAGLE PASS, Texas – U.S. Border Patrol agents assigned to the Eagle Pass South Station marine unit saved the life of an undocumented immigrant teen after he and his family, all from Honduras, attempted to cross the Rio Grande River Tuesday afternoon.

“Words cannot express my gratitude nor convey the sense of pride I have for these agents,” said Del Rio Sector Chief Patrol Agent Raul L. Ortiz. “Without a doubt, their quick life-saving actions brought this young man back from the brink of death.”

On June 25, Border Patrol agents performing maritime operations on the Rio Grande River observed two individuals struggling to stay afloat near the Eagle Pass Port of Entry. As agents moved to assist, they saw a third person a short distance down-stream, submerged beneath the surface and unmoving. Agents moved closer and pulled the lifeless teen aboard their vessel. The 13-year-old male was unconscious and not breathing, and had been underwater for more than a full minute. The vessel commander quickly performed CPR, assisted by the vessel’s crewman. Through the agents’ efforts, the teen eventually coughed up water, began breathing on his own and regained consciousness. The other two people, later determined to be the rescued teen’s parents, were recovered from the river and all were brought safely to the U.S. shore.

Border Patrol EMT agents were on scene and evaluated the family of three until EMS personnel arrived. They transported the teenage male, accompanied by his mother, to a local hospital for advanced care. After being medically cleared, the family was taken to the Eagle Pass South Station where they were processed per CBP guidelines.