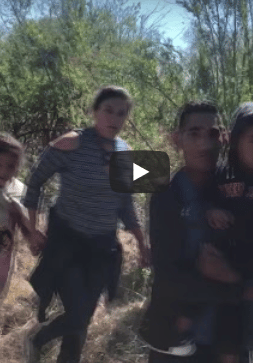 While scouting potential sites to build their border wall, Bryan Kolfage and his team (WeBuildTheWall, Inc) encountered a group of about 30 Hondurans who had just illegally crossed into the United States.

Out of nowhere, illegals started coming out of the bushes … They weren’t even looking for these illegals yet just like that, there they were within 30 minutes.

Their team was out scouting potential locations for their first segment of border wall when they got to see firsthand exactly why we need to build a wall.

As they were driving along the border on a privately owned piece of land, a member of their team noticed some movement in the bushes along the side of the road. About thirty immigrants walked out of the bushes, they say.

Members of Law Enforcement they had spoken with in Texas told them that as many as 60,000 illegals cross every MONTH, and that’s just in Texas.

Below is some of the video Bryan’s team captured!!! #BuildTheWall