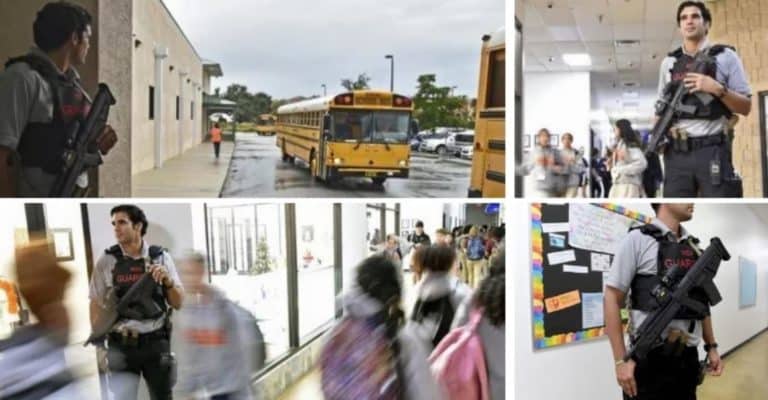 Just south of Tampa, Fla., students at the Manatee School for the Arts (MSA) roam the hallways past an armed combat veteran who is constantly looking out for threats. By the end of February, another one will be manning a guard shack at at the school’s entrance.

39-year-old Harold Verdecia, a former infantryman in the US Army who completed tours in Iraq and Afghanistan, patrols the hallways of Manatee strapped with a 9mm Glock 19X and a Kel-Tec “Bullpup” rifle, according to the Herald Tribune.

Verdecia isn’t there to get to know the kids, break up fights or do the typical community-policing that school resource officers typically do, said MSA Principal Bill Jones.

Verdecia has one job: Stop an active shooter. –Herald Tribune

“When seconds count, (Palmetto police) are only a few minutes away,” says Principal Jones – who has gamed out the nightmare school shooter scenario in exacting detail. He’s also justified Verdecia’s use of a semi-automatic rifle instead of just a handgun.

“We’re not looking for a fair fight,” Jones said in an interview cited
by the New York Times.

“We’re looking at an overwhelming advantage.”