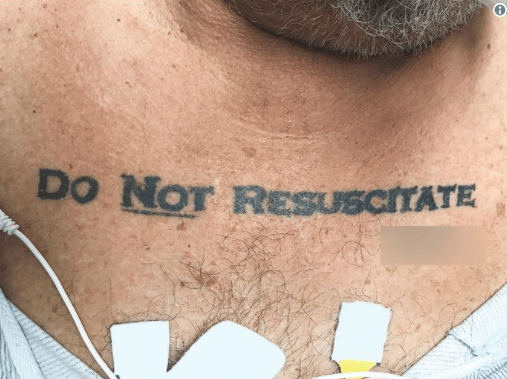 An unconscious man with the words “Do Not Resuscitate” tattooed on his chest left emergency room physicians questioning how to proceed at a Florida hospital.

The unnamed elderly man had no identification and no family members with him, according to The New England Journal of Medicine. His tattoo had a signature beneath it that was presumed to be his own.

Paramedics transported the 70-year-old man who was suffering from atrial fibrillation, an irregular heartbeat, to the emergency room at a University of Miami hospital, according to a case study published in The New England Journal of Medicine. He had an elevated blood-alcohol level, was diabetic, and had a history of pulmonary disease.

“We initially decided not to honor the tattoo, invoking the principle of not choosing an irreversible path when faced with uncertainty,” the four University of Miami doctors wrote in the case study.

They treated the man with antibiotics, intravenous fluids, and a bi-pap machine to sustain life while social workers searched for next of kin and with the state of Florida for a written DNR request.

After a case review, ethics consultants advised the hospital to honor the patient’s DNR tattoo.

“[I]t was most reasonable to infer that the tattoo expressed an authentic preference, that what might be seen as caution could also be seen as standing on ceremony, and that the law is sometimes not nimble enough to support patient-centered care and respect for patients’ best interests,” the study authors wrote.

The patient’s health declined, and he died later that night without intervening measure to save him.

Later, social workers did obtain a copy of the man’s written Florida Department of Health “out-of-hospital” DNR order, which was consistent with the tattoo and the ethics consultants recommendations.

The authors noted that this case study neither supports or opposes the use of tattoos to express end-of-life wishes.